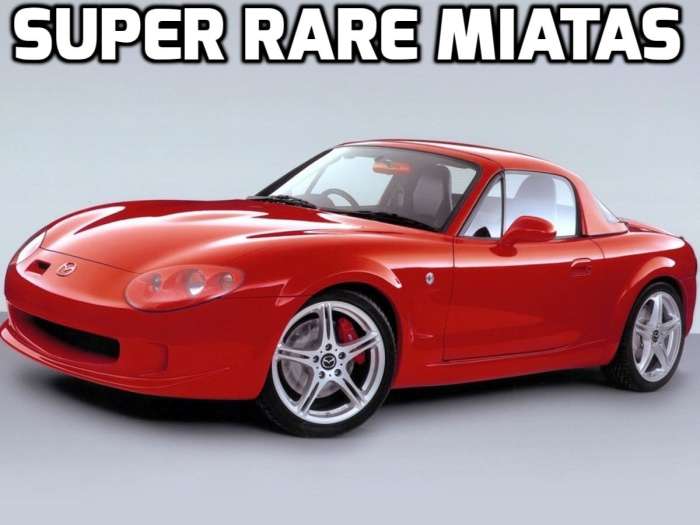 Americans Never Got These Rad Miata Specials, but When You See Them, You'll Want One

It's pretty well known that there are great cars that never made it to the States. This comes as a result of a number of different factors--safety and emissions are the big ones--but some special editions are only released in a country or two. That's the way it is with some of these special edition Miatas, such as the Mazda Roadster MPS in the picture. After you see some of these cars, you'll want to grab one, or move to where you can buy one.
Advertisement

If you've ever looked at the kind of cars which are sold only outside the U.S., you've probably seen cars like Skylines and S15 Silvias. Safety and emissions keep these cars from passing U.S. regulations, and so you'll have to wait until the slip under the 25 year law to buy them. If you're in the market for an imported car, here are three rare and awesome Miatas. You may not have heard of them, but they look--and perform--like no other Miata you'll see in the States.

That's right. It's a turbo MX-5. It came with the little 1.6, which normally puts out less than 100bhp, but in this case, the Brits had access to 850 turbocharged versions which increased the figure to 152bhp. The car comes with sharp looking 5-spoke alloy wheels and a spoiler to match. These little bombers are not going to be easy to find, with only 850 examples produced, but if you got your hands on one, you might be able to import it, since it fits in under the 25 year rule. You can check it out here.

One of Mazda's most legendary race cars was the 787b. It was a LeMans racer which had a howling rotary and a signature orange and green livery. To recognize the significance of the car's career, Mazda made a Miata with a tribute livery.

This car also has an epic upgraded 1.6 which puts out 150bhp. This one was sold in both Japan and in England, but there are only 324 copies between them, so your chances of finding one are slim. If you want to check it out, take a look.

There are plenty of other rare Miatas which you can check out. In fact, there's an entire database for them.

But out of all of the ones I saw, the one that stuck out the most was called the Mazda Roadster MPS. This is technically an NB, but the styling cues of the NC are clear in the body modifications. The car was designed and built by Mazdaspeed, but unlike the Mazdaspeed MX-5 we got in the U.S., the MPS has a naturally aspirated 2.0 liter engine which produces 200bhp.

That's more than any Miata ever sold in the U.S. Even the upcoming increase in horsepower is 19 shy of the MPS. In addition the car has upgraded suspension and brakes, and nice 17in alloys. When the car was sold new, it was about $36,000 in Japan. Now, they're probably worth much, much more.

Which special edition would you want?