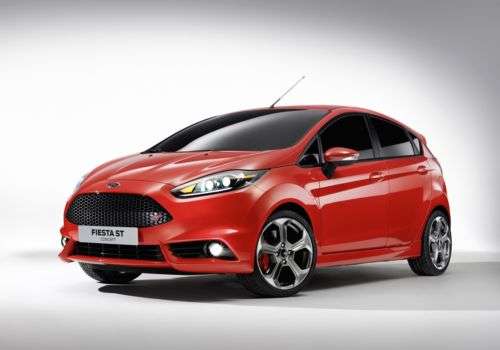 The Ford Fiesta ST concept will be the automaker's second release under the new global positioning approach to the design and fabrication of their automobiles, following the Focus ST concept when both debut at the LA Auto Show later this month. Ford plans to build vehicles to compete in the global market without continental variants produced in Europe or Asia. Such vehicles are a break from the brand’s traditional business model.
Advertisement

The new five-door Fiesta ST concept has bold new styling including a striking new mesh grill and will reportedly carry the high-performance DNA of its predecessors, including the European Fiesta XR2 and XR2i, Fiesta RS1800 and RS Turbo and the more recent first-generation Fiesta ST.

“The Fiesta has a rich history of high-performance models so a new ST performance model is a logical next step in our performance vehicle strategy for our global small cars,” said Derrick Kuzak, Ford group vice president, Global Product Development.

The Fiesta ST Concept represents a technologically advanced and freshly restyled embodiment of that continuing tradition in a global performance version of Ford’s best-selling commuter.

“With a racing silhouette inspired by global Fiesta race and rally cars currently competing on the world stage, and influenced by the unique appearance of the all-new Focus ST, the new Fiesta ST Concept is an exciting demonstration of the road-going Fiesta’s potential,” Kuzak added.

As the Fiesta RS World Rally car and Fiesta Rallycross cars currently compete in some of harshest international motorsports events, now is the perfect time to boost the technology and performance of the street model. In fact, Ken Block’s Gymkhana THREE, part 2 (see below) which features one of the aforementioned racecars, has racked up over 37 million views on YouTube for the brand.

The EcoBoost powerplant in the Fiesta ST Concept also features twin independent variable camshaft timing (Ti-VCT), specially developed to provide power and torque living up to the ST badge, which stands for Sport Technologies, according to Kuzak.

Given the growth of the small car segment, as a result of both economic and environmental concerns, Ford has a very good chance of grabbing the brass ring with this performance-oriented model.

Maturity may mean making more responsible choices, but that does not mean you wouldn’t prefer the luxury of irresponsibility. So given a little of each, a lot of people will be quite happy.