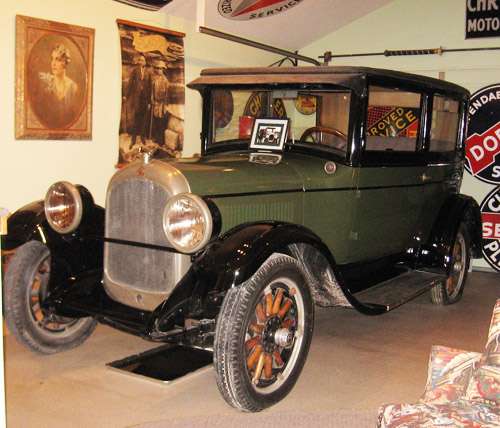 Why you should visit the Walter P. Chrysler Boyhood Home and Museum

Walter P. Chrysler built an empire in the automotive field with only a high school diploma, a burning desire to discover how things work and a childhood reputation as a master marble shooter who played for keeps.
Advertisement

He was born April 2, 1875, in Wamego KS, son of Henry (Hank) and Anna Marie Chrysler. Hank worked for the Union Pacific railroad, which moved the family to the nearby railway town of Ellis during 1878.

Walter lived in the two-room house of his father until he was 22, though the size of the house grew along with the family and Hank’s earnings. Hank was the first man to drive a coal-powered locomotive through Kansas.

As a young boy, Walter milked his mother’s cows and had a thriving business selling milk to the railroad workers in the town. They got paid monthly, so Walter learned to take meticulous records so he could collect the monies owed him on payday. Milk was a nickel a quart then and Walter got two cents from everyone he delivered.

This was quickly learned during a visit to the Walter P. Chrysler Boyhood Home and Museum in Ellis KS, yesterday, from a volunteer tour guide who declined to be identified. The P stands for Percy, making it easy to understand why Walter simply left it an undefined initial.

“He played marbles even after high school and was known to have taken a few paychecks from those who thought they could beat him,” the guide said.

The museum is set behind the quaint little house with the white picket fence that Walter helped add on to when he was 12. Inside you will find an amazing collection of photographs, personal effects and mementos, caricatures, newspaper articles, paintings, his desk, blueprints of the Chrysler Building, die-cast model cars, dealer signage, automotive renderings, clothing and even grand genealogies he made for his children claiming direct descent from Charlemagne, Vikings and Valkyries. It is a short drive off the Ellis exit from I-70.

He was also an avid baseball player as a young man – a second baseman who reportedly could run like the wind and catch lightning, too.
Walter got his first real job working for Union Pacific like his father – his job was to wipe down the locomotive engines, so when he was moved to sweeping floors, it was considered a promotion.

From there he started getting jobs in the railroad shops, developing some ability as a machinist. He even forged and crafted his own tools, but all the while he always carried the little notebook that had become a habit when was keeping track of quarts of milk.

Once he learned all he thought he could at one shop, he move on down the line to find a place where he could learn more. He developed his love for automobiles when at the Chicago Auto show in 1905 he saw a Della Locomotive.

The car cost $5,000 – an astronomical sum in those days, but Walter convinced a banker to loan him the money to buy it. Once he got his hands on it, he completely disassembled and put it back together to learn how it worked. Having figured that out, he got in, started it up and promptly drove through a neighbor’s fence. Supposedly he got better at driving with a little practice.

Though there are a good many treasures to be seen in the museum, one of the most interesting is an early prototype of the first Chrysler model built. Inside the museum is a completely original 1924 Chrysler Six in pristine condition. It was so named for the 6-cylinder engine. This one has a plaque on the dash identifying it as zero-zero-six of the line. The sixth car ever built by Walter P. Chrysler.

So why was Chrysler’s low-cost line named Plymouth? Walter wanted to build a car to sell to America’s farmers, who still represented 56 percent of the populace at that time. All farmers were familiar with Plymouth Binder, used to tie straw into bales among other uses. It was a name that represented utility and reliability in the farmer’s mind, so the new vehicle was so named.

This was among the first automatic transmissions – meant to “enable” women to drive. Women can’t handle a stick shift was the wisdom of the day so the HyDrive was trotted out to relieve the ’50’s woman of her immobility, despite the fact women had been driving cars since they were first built.

Of further significance is the fact the Savoy was among the first cars to feature new technology known as air conditioning – something in all cars today.
A whole afternoon could be easily spent in discovery of the early life and career accomplishments of Walter P. Chrysler in the museum and childhood residence of the American icon. If you have any interest in the Chrysler Auto Group today, you might like this immersion in its early days.

For the record, the local Plymouth dealer bought the house when the Chryslers moved out of the house. The dealer gave it to the Chrysler Corp. that in turn deeded the property to the town of Ellis. They gratefully share it with others for only $4 for adults and $3 for children.

The cars outdoors were garaged until just recently. The town needs help to see that gems of the past like the 1940 truck and 1954 Savoy are properly housed and preserved. If you or someone you know can help they can call 785-726-3636.

From humble beginnings great things can come. Something it doesn’t hurt to remember now and then. Such is the story of Walter P. Chrysler.