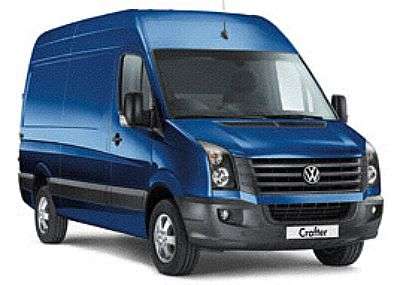 The Volkswagen Crafter commercial van will officially move into Volkswagen Van Centres in Europe this month on the heels of an aggressive ad campaign focusing on the commercial van’s class leading 38.7 mpg, lower operating costs and reduced emissions that qualify it as an Enhanced Environmentally friendly Vehicle (EEV).
Advertisement

The Volkswagen Group recently chided the U.S. government for the unfairness of the CAFE requirements due to what they considered loopholes for light trucks, which Volkswagen doesn’t sell in America. They also think the new regulations unfairly slight diesel vehicles that are highly encouraged in Europe.

It is within the realm of possibility the actual result of these new requirements may be VW’s introduction of their commercial vehicles into the American market. Volkswagen Commercial Vehicles (VWCV) is now a separate brand and marquee under the aegis of the Volkswagen group.

For example, the new VW Crafter CR35 2.0-litre TDI 163 PS BlueMotion medium wheelbase panel van achieves 29 percent better fuel economy than the previous 2.5-litre BlueTDI engine with the same output. An increase of up to eight miles per gallon extends the range of the 19.8-gallon tank as much as 130 miles. Further, the lighter engine increases the payload capacity by up to 220 lbs.

At the same time emissions have been reduced by more than 10 percent. For example, the CR35 2.0-litre TDI 163 PS BlueMotion model has carbon dioxide emissions of 199 g/km, compared to 258 g/km for the previous engine with the same power output. The new Crafter qualifies for EEV status as it comes off the lot.

Volkswagen sales personnel have had a product immersion comparing the new vans to the most directly competing models of their rivals, emerging as enthusiastic believers in the product’s market viability.

Nector wrote on November 4, 2013 - 11:23pm Permalink
I would like to bring these vans into the US. Would you know how I can go about doing so? Thanks Nector