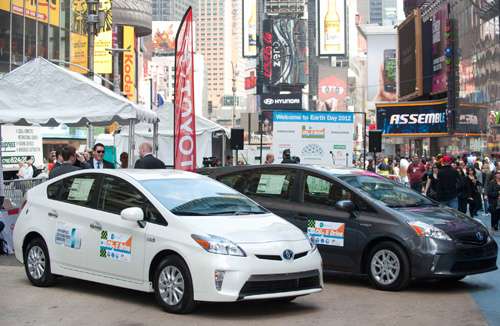 Toyota Motor Corporation (NYSE:TM) has recently announced reaching the mile marker of four million in global hybrid sales as of this April, from18 different hybrid models available in 80 countries around the world. During 2012, hybrid vehicles have accounted for a full 15 percent of the brand’s global sales.
Advertisement

Since the Japanese introduction of the Prius in 1997, followed by the U.S. debut in 2000, Toyota Motor Sales (TMS), U.S.A. has sold 1.5 million hybrids in the U.S., 65 percent of all hybrids on U.S. roads. The iconic hybrid now comprises one of every two hybrids in the country with 1.2 million sold as of this April.

The expanded line is helping to boost Toyota Prius sales with the roomier Prius v introduced last November 2011, followed by sub-compact Prius c and rechargeable Prius Plug-in during the first three months of 2012. The Prius family has sold 60,859 or the various models in the U.S. so far this year.

"All of us at Toyota would like to sincerely thank our customers, who have made Prius the best-selling hybrid in the industry," said Bob Carter, group vice president and general manager, Toyota Division. "While we're proud of this accomplishment, we are not stopping here as hybrids will continue to be a core technology for Toyota."

Several Lexus models are also available in hybrid models. These include the CT200, HS, GS, LS and RX hybrids.

Toyota estimates the hybrid vehicles it has sold worldwide since 1997 have resulted in roughly 26 million fewer tons of C02 emissions than would have been produced by purely gasoline-burning vehicles of the same size and performance level.

When we added up the Toyota and Lexus hybrids sold in the U.S. we noticed it did not add up to 18, so Carly Schaffner, a Media Relations Specialist for TMS, was gracious enough to fill us in on the other models. Hybrid models known as the Crown, Estima, Harrier, Vellfire and Sai are sold in Japan only. The Auris hybrid is sold outside of Japan, but not in the U.S. The Lexus LS also comes in a 600h and 600HL.

Hybrid cars may not be for everyone but they are a significant aspect of the Toyota stable for what looks to be a long time to come.