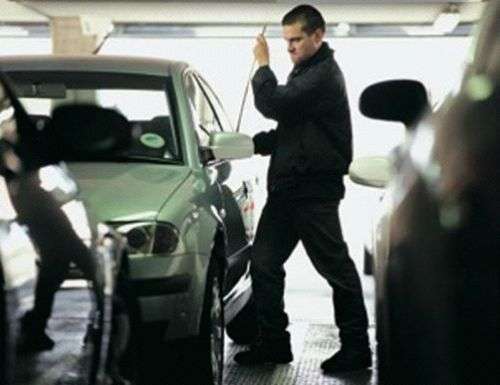 Summer is prime time for vehicle theft, with July and August ranking as the months with the most auto theft incidents of the year. July 4th has the dubious distinction of ranking #3, according to the latest FBI data, of holidays with the highest reports of auto theft. Theft protection authorities caution consumers to not grow complacent about the security of their vehicles by not using common sense to protect themselves from becoming victims of this insidious crime.
Advertisement

How do most people make their cars a targer? They leave the keys in the car.

During 2010, the Baltimore Regional Auto Theft Task Force examined 400 arrests involving recovered stolen vehicles and found 85 percent had been stolen with the vehicle's keys. That's an increase of 25 percent from 1995. In 2009, the Arizona Automobile Theft Authority announced almost 20% of all stolen vehicles had keys left in them. In 2008, the Texas Department of Motor Vehicles reported thieves stole nearly 90,000 vehicles in Texas – in a staggering incidence rate nearing 50 percent, the key was left in the ignition.

If your registration and garage opener are in the car the thief now has your address and can take not only your car but also whatever they can fit into it from your home.

Though vehicle theft rates are declining, the national rate of unrecovered stolen vehicles is higher than ever before in 25 years, with professional thieves outsmarting many anti-theft devices and making an industry out of vehicle theft. Nearly half of all vehicles stolen in 2009 (latest FBI data) were never recovered, amounting to 343,274 stolen vehicles the rightful owners would never see again.

The National Insurance Crime Bureau (NICB) and LoJack Corporation are embarking on their fifth annual National Vehicle Theft Protection Month effort in order to help owners protect their vehicles from sophisticated car thieves, especially during their summer touring vacations. The organizations have developed three informative YouTube videos and a podcast, containing a variety of valuable information about vehicle theft protection.

What you can do:

• Use Common Sense Measures
Never leave keys in the car with it running. DO NOT hide a spare key in the vehicle. Close the windows and lock the doors when leaving. Park in a well-lit area and, when at home, keep your vehicle in the garage. Don't leave anything of value visible in your car, particularly those items compromising identity -- thieves could drive off not only with your car, but your identity as well.

• Use Theft Prevention Products
A thief will be less likely to steal your car if it has visible and/or audible warning devices like The Club or an alarm system. Immobilizers provide another means of protection including smart keys, kill switches and fuel cut-off devices. While these systems can be disabled, they are still a deterrent and make thievery take a little longer which works in your favor.

• Use a Tracking and Recovery System
Professional thieves can usually disarm most theft prevention devices, making recovery systems the best assurance you'll get your car back if stolen. The most effective systems are covert, so they cannot be disengaged and are integrated into law enforcement and use Radio Frequency technology, the optimal method for recovering stolen vehicles.

LG's New EV Battery Plant Is a Welcome News for Tesla
Tesla Giga Berlin's New Hurdle: It's Not Only the Gov't, but Now Tesla Itself
END_OF_DOCUMENT_TOKEN_TO_BE_REPLACED