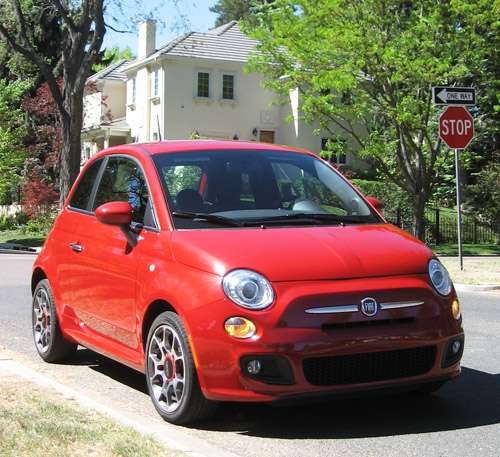 The 2012 Fiat 500 Sports comes in a high-gloss Brilliant Red, among other choices, that truly befits its flashy urban style and surprising small car performance.
Advertisement

If the Cabriolet model we wrote about last week has XX chromosomes, this hot-blooded cousin is definitely of the XY persuasion. It is a marvelous choice for the young male urbanite – ribald, racy and yet slightly sensible.

You notice the XY chromosomes with one sequence through the gears – if you don’t get if from the black interior with red accents and cloth seat trimmed in a color best conveyed as the hue of dried blood.

The 2012 Fiat 500 Sport is tuned for performance – a higher, more instant output from the 1.4-liter inline MultiAir engine and a stiffer, sportier suspension – ready to whip through urban traffic like a pinball that bounces of the bumpers without touching them.

It fiery red color goes well with its hot-blooded character and can get the blood racing in an old dog recalling the glory of his playful puppyhood. In simple terms, this little car is way fun to drive.

Given that, the specification sheet contained a surprise when I checked the price. The basic cost for the 2012 Fiat 500 Sport is only $17,500 and with the five-speed manual transmission it gets 34-mpg combined. Maybe better if its genetics don’t give you a heavy right foot.

When you compute a fun to price coefficient juxtaposing cost to operate against the joy thus derived, setting the city aflame in this firecracker commuter rates pretty high.

We even took it for a mountain drive and it climbs well, requiring downshifting to third gear only on the steepest of grades. When it comes to cornering, the 2012 Fiat 500 sport could easily take those speed restricted curves at 20-mph over the stated safety point, though we certainly didn’t push it that far for obvious legal considerations.

It just at the posted limit, its kind of like riding the Tilt-A-Whirl at half speed – a goldfish bowl could ride in the seat beside you without spilling a single drop around most of those mountain curves.

The main oversight in the Fiat 500 Sport is the lack of extendable sun visors, but it is a common problem with many cars that could have an aftermarket solution. Also, unless the driver and front seat passenger are no taller than five-foot-nine, the back seat is only suitable for the very young or those with pencil thin legs.

It’s about the right size for toddlers, but we had no chance to see how a carrier would fit, and imagine it might be a hassle to attach, since the subject came up. It’s not a large space to maneuver in, even with the front seat slid forward.

Then again, this car is built for young players or couples in the pre-progeny stage of life. Those still out to set the city aflame rather than making the highly significant move to the baby stroller set. If the sporty commuter belonged to a couple, it would definitely belong to the individual with XY pairing, interpersonal politics notwithstanding.

The fiery red color is an option, but with TomTom Navigation, Blue&Me hands free phone connectivity, a one-year SiriusXM subscription plus destination charges, you can still pick up the 2012 Fiat 500 Sport with five Benjamins left from $20K.