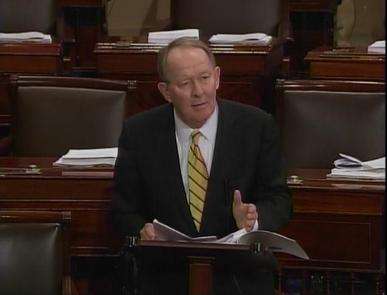 "A conservative estimate is that we have an amount of electricity unused at night that’s equal to the output of 65 to 70 nuclear power plants between 6 p.m. and 6 a.m.," Senator Lamar Alexander (R-Tenn) stated before the Senate Energy and National Resources Committee. “I suspect that’s probably our greatest unused resource in the United States. If we were to use that to plug in cars and trucks at night, we could electrify 43 percent of our cars and trucks without building one new power plant.”
Advertisement

The remarks were part of the Sen. Alexanders’s address to the committee today regarding the Promoting Electric Vehicles Act introduced he introduced last week with the co-sponsorship of Sen. Jeff Merkley (D-Ore). The bill proposes providing short-term incentives to advance the adoption of electric vehicles as the best way to take advantage of available resources and lessen national dependence on foreign oil.

After greeting his distinguished colleagues, Alexander pointed out that, “The difference this year is that the price of gasoline is higher than it was last year, and the bill before you today costs less than it did last year.”

He believes this is an appropriate role for the Federal government to create short-term incentives for much wider acceptance of electric vehicles and further research into battery power storage.

“Finally, if you believe that the solution to four-dollar gasoline and high energy prices is finding more American energy and using less, this is the best way to use less. Electrifying half of our cars and trucks could reduce our use of foreign oil by one-third, saving money on how we fuel our transportation system and cutting into the billions of dollars we send overseas for foreign oil.”

He continued to tell the story of how Ross Perot made billions by buying the computer time banks weren’t using at night and selling cheap computer time to state governments.

“In the same way, we have an enormous amount of unused electricity at night. A conservative estimate is that we have an amount of energy that’s unused at night that’s equal to the output of 65 or 70 nuclear power plants between 6 pm and 6 am. I suspect that’s the greatest unused resource in the United States. And if we were to use that resource to plug in cars and trucks at night, we could electrify 43 percent of our cars and trucks without building one new power plant.”

To illustrate his knowledge of electric cars, Alexander revealed his ownership of first a Toyota Prius and now a Nissan Leaf. “I think this will work is because it’s easy for consumers,” he said. I now have a Nissan Leaf. I have an apartment nearby and I charge it at night. I don’t even have a charger – I just plug it into the wall, and I can drive a couple of hours every day without buying any gas… and I’ve had no problems. For that reason, almost every car company is making electric cars today or will soon have them on the market.“

Arguably if the cheap electricity is there and the cars are available why should the government get involved?

“Four dollar gasoline is killing our economy, throwing a big wet blanket over it and the only solution is to find more, use less – and this is the way to use less.

For the last three years that has been a Republican mantra – find more, use less. Democrats have been criticized for wanting to use less without seriously looking for more.
“We’re subject to the same criticism if we want to find more and don’t have a credible way to use less. This is the best way to use less oil.”

Citing national security the Senator reminded the committee “Richard Land, president of the Ethics and Religious Liberty Commission, endorsed the bill last year, saying that national security concerns overwhelm any opposition to it, and it’s the best way to displace our use of oil.“

“Finally, can we afford it? It’s a billion dollars cheaper; it is an authorization bill within the money we spend every year. We should be setting priorities; this should be a priority.

“So, in summary, thank you for the time to address $4 gasoline and high energy prices,” Alexander concluded. “We need to find more American energy and use less. The single best way to use less is to jumpstart electric cars and trucks. You approved it once before. The problem is worse than when you approved it last year; the bill costs less than when you last approved it; it’s an appropriate role for the federal government, and we’ll work with the appropriators, if you report it, to find a way to enact it without adding a penny to the debt.”