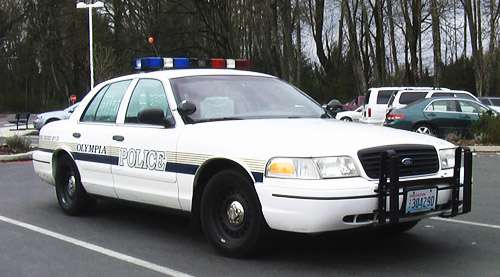 The real difference between police and private cars

What the sight of a police car inspires, especially in your rearview mirror, differs from person to person. To some they inspire an air of security – for others the same image inspires paranoia, whether for good reason or the simple fear of an unintended violation of some little known statute.
Advertisement

The demands the constabulary place up their vehicles require industrial strength capabilities. Patrolling, intercepting suspects in flight, illuminating the dark, communications, information retrieval, performance and handling all require their own specific accessories and upgrades.

So what makes a police car different from other cars on the street?

Perhaps first and foremost, they need a high-output engine. As most passenger cars, with the exception of muscle and exotic cars, are switching to smaller V6 and 4-cylinder engines, police interceptors still tend to use V8s, though by and large more police cars have V6s as well. Interestingly, more and more private cars have turbochargers, just like police cars.

There are things you can do to increase the horsepower of your engine, but you don’t want the local department's gas bill and you still can’t outrun a radio in the fastest of cars.

One of the big differences is the greatly enhanced electrical output needed to run all those lights, sirens, radios and other equipment. So while most private cars have a 100-amp alternator, the ones in cop cars can crank out up to or over 225 amps. Of course you can upgrade your alternator to run all sorts of groovy things, but that focused electromagnetic pulse generator you’re considering may not be legal. In any case, its use would be officially frowned upon with extreme prejudice.

Check out the video below for Eric the Car Guy’s step-by-step tutorial on replacing your alternator.

The extra bulk of all the stuff police take along requires a heavy-duty suspension and braking system to allow for the extreme maneuvers required of them now and then. Larger, stronger brakes, heavier springs, shocks and stabilizers keep cop cars on track and enable smooth stops in spite of the extra weight.

Other heavy-duty components include the drive shaft, u-joints, frame mounts, wheels and exhaust system – all much sturdier than a civilian’s car.

One of the little known differences is a dual mode of interior lighting. At night the police cruiser’s interior lights can switch from white lighting to red, like that in a darkroom, if you were ever in one. Red lights don't cause you iris to tighten, so when the officer exits his vehicle, he won't be blinded in the darkness.

A very cool feature is the Run lock ignition, used when the officer wants to leave the car running so the lights and radio can stay on without draining the battery. This feature allows the engine to run without a key in the ignition.

This is feature some private citizens would prize for warming their car on cold mornings. In some urban areas, it is illegal to leave your car running on the street, but remote start allows the car to run with no key and locked up tight, solving the problem.

Vehicle tracking system allows officers to track a stolen vehicle fitted with LoJack or another transponder, guiding them to it. Of course, you can track your son or daughter with certain available apps, but they use a specific code provided by the security system to track a specific vehicle.

Another major difference is the video camera and recording device on the front of a modern police car, a great help in documenting the chronology and causality of events and an occasional embarrassment to errant officers that forget it is there.

Notably the very first police car was a wagon powered by electricity and deployed on the streets of Akron, Ohio in 1899. A full charge would propel the primitive pursuit vehicle up to 16-mph for up to 30 miles before needing a fresh charge. We've such a long way from there.

SortingHat wrote on August 10, 2016 - 7:00pm Permalink
You also forgot about the front bumper. Private cars do not have that though you can get a snow plow and work privately plowing snow so I guess that could count as a *bumper*. The police bumper I think is used to absorb shock in case of a head on collision or to do the PIT? As for snow plows We had a real friendly neighbor in Paradise California and the few times we had a couple inches of snow that would stick like cement he plowed it for free! You see we lived at 2,000 feet often the rain/snow line for Northern California so one end of town would have a bit of snow and the other half just a cold rain at least once or twice a year. I don't know why police don't equip their own private blades in front of the police car so while they go cruising they also go plowing at the same time! Two for one!
Ray wrote on February 7, 2017 - 4:44am Permalink
One thing police cars nowadays have is room under the dash or between seats for radios, sirens, light panels, or computers. There are no small number of radio enthusiasts out here who seriously despise the way each year, auto engineers manage to design and console out any conceivable space where one might add a CB, scanner, ham radio, GMRS, or business radio. Believe it or not, for a lot of us, not having room to mount certain radios is often a deal killer on an otherwise desireable automobile model. Manufacturers, please take note.
Chuck wrote on May 6, 2018 - 12:14am Permalink
Another item is that they don't have is center consoles. That area is taken up with other police equipment. That means there is no place for the gear shift there, so the gearshift is now back on the steering column.
SortingHat wrote on May 19, 2018 - 8:02am Permalink
What about locking mechanisms?