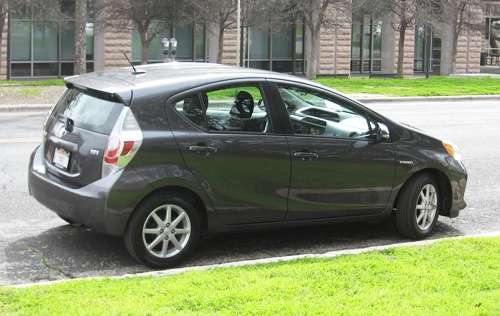 An overview of the brilliant, breakthrough 2012 Toyota Prius c

The 2012 Toyota Prius c will arrive at dealerships next month as a triumph of ergonomic engineering in an over 50-mpg hybrid with a breakthrough price under $20K.
Advertisement

“The Prius c is the gateway vehicle for the Prius Family, with a perfect mix of size, advanced technology, style, and price for young eco-conscious buyers on a budget,” said Rick LoFaso, corporate car marketing manager for Toyota. “Up to this point, many of them have desired a hybrid that fits their needs but, until now, have found it out of reach.”

LoFaso was addressing assembled media representatives at the Westin Hotel in Austin, before allowing the attendees the chance to drive the new compact 2012 Prius c, the fourth in the growing Prius family.

Notably, expecting a very good year for auto sales, Toyota is planning to fully participate in the upswing with a new or updated model release every 19 days the remainder of 2012.

Aimed at young couples and singles, commonly known as Millennials, the 2012 Prius c has styling, handling and a price point to draw in those who have never owned a hybrid before, but are desirous of the 53-mpg city – the best of any car without a plug.

“It’s our customers who have led us to make the Prius a family, with each model filling a distinct role and delivering unique benefits to a variety of ages and lifestyles,” added LoFaso.

To woo these drivers who are unfamiliar with the hybrid way of doing things, certain elements of the traditional gasoline only vehicle have remained to ease their transition. The 2012 Toyota Prius C has a standard key in its lower two trim levels, plus a floor mounted shift lever instead of the standard Prius dash-mounted T-shifter.

The upper two trim levels come with push button start standard for those more in tune with state of the art technology. The four models are designated Prius c 1, 2, 3 and 4. They range in price from $18,990 to $23,990, with varying levels of technology and appointments.

To achieve the top efficiency rating it has, the vehicle has been lightened to only 2.496 lbs. and uses a 1.5-liter engine in the Hybrid Synergy Drive, as compared to the 1.8-liter in the Prius liftback and Prius v.

According to Dave Lee, senior product education and development administrator for Toyota, a small car is much more difficult to make aerodynamically slippery than a longer one, and the 2012 Prius c employs numerous airflow devices to achieve a coefficient of drag of only 0.28 – a remarkable achievement in and of itself.

Lee delivered the technical side of the 2012 Prius c briefing last Thursday in Austin TX.

The nickel hydride battery is 26 percent lighter and reconfigured to fit beneath the back seat instead of behind it, where it is placed in the other Prius models. This placement gives the car a lower center of gravity, greatly complimenting the small car's handling. This configuration also allows for the addition of a 60/40 fold down rear seatback, allowing room for snowboards or even bicycles within the compact 2012 Prius c. The two lower time levels also fold down but lack the split back.

Since it’s introduction, the Prius line has sold 2.5 hybrids worldwide, 1.1 million is the US since 2000. The lower case c in the model’s designation does not stand for compact as the casual observer might presume – it stands for city.

The 2012 Toyota Prius c stands at the threshold of Toyota’s hybrid march to 2 million units in US sales, destined to attract a whole new cadre of urban hybrid converts to the company fold. Toyota has added a powerful new tool for the young person thoroughly involved and dedicated to smart competition in the never-ending game of life.

Just remember there is no Free Parking and the Bank never makes an Error in your Favor.