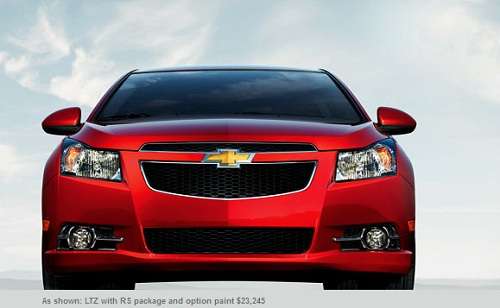 Detroit is selling more cars and that has a lot to do with the Chevy Cruze and Volt as well as the Ford Fiesta and Focus, as the country turns to higher mileage vehicles with gasoline prices near historic highs. Though they still make more per unit on crossovers and SUVs, the higher demand for small cars is making them more profitable.
Advertisement

“Ford’s tiny Fiesta is the best-selling subcompact in the United States this year, and G.M.’s Chevrolet Cruze outsold every other compact car in America last month except the segment-leading Honda Civic,” stated an article published yesterday in The New York Times by Bill Vlasic.

The article goes on to say over one in four vehicles sold during April was a compact or subcompact car, double the number of small car sales just a decade ago. Of those sold last month, a full 27 percent were American cars. One year ago only one fifth of small cars sold were American brands – it has traditionally been the unchallenged domain of imports from both Europe and Asia.

“There is a less-is-more mentality,” Jeremy Anwyl, chief executive of the auto research site Edmunds.com. is quoted as saying. “The market demand and receptivity for these vehicles just didn’t exist four or five years ago.”

Yes it seems all that is changing now along with American attitudes regarding fuel economy and the environment – but that’s not all that’s changing – Americans are growing bigger as cars get smaller.

An article posted May 24 by Sharon Silke Carty on AolAuto.com asks the poignant question, “Are Americans Too Big To Drive Small?”

According to the Get America Fit Foundation, 60 million Americans are obese. Recent news reports have placed the incidence of obesity at nearly 5o percent even in Colorado, formerly one of the most fit states in the union due to a commonly accepted, active and outdoor lifestyle.

Carty talked with Karen Steelman for her article and mentions her body mass index of 37 – a full seven points over the level considered obese on that scale. Though Steelman is concerned with the environment she claims to simply not feel comfortable in a small car.

"I want to be environmentally friendly, but unless I am in an SUV these days ... I find no pleasure or comfort in driving," she is quoted as saying.

“So, unless the entire country goes on a diet,” said Dan Cheng, vice president and partner at business consulting firm AT Kearney, “we may be destined to keep driving big cars no matter how much a gallon of gas costs in the future.”

As a matter of fact, the number of light trucks – including SUVs, minivans and pickups – sold in the U.S. has kept pace with the growth rate of obesity since the 1970s.

A system based on perpetual growth is bound to run into trouble on a planet of finite resources. Similarly, something has got to give as cars continue to get smaller while Americans persist in growing ever larger.