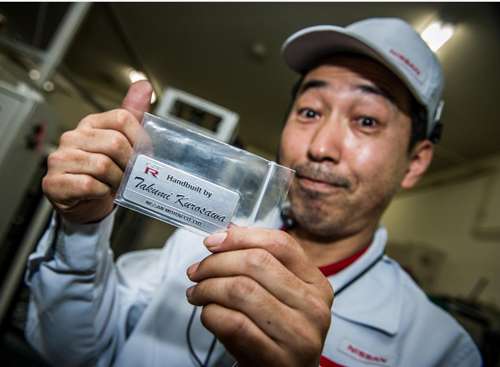 Nissans master craftsmen are known as Takumi and there are only four of these who build the twin-turbo VR38 engines used in the hallowed GT-R – to show their pride in their creations, each signs the block of the engines he builds.
Advertisement

These expert workers at the Yokohama Engine Plant have between them over 100 years experience in the fabrication of engines. Over its 80 years of existence, the factory has built over 35 million engines, but none to compare to the powerplant of the Nissan GT-R.

"By putting my name on the engine block, I strongly feel I represent Nissan and am regarded as a builder of GT-R engines," says Kurosawa. "I feel a strong pride."

If you built something of such power and beauty, wouldn’t you?

Though automation is an ever-growing part of auto production today, assembly of 374 GT-R engine parts is still a task for master craftsmen, performed in a controlled clean room and lovingly assembled by hand.

Tsunemi Ohyama has stood witness to the continually improving quality and technology of Nissan engines over three decades with the automaker.

"When GT-R production started in 2007, valve clearance adjustment was by machine, but now everything is by hand - measuring, tightening, measuring again. After manual checks and confirmation, only then do we deliver to our customers."

Takumi Kurosawa, whose father apparently expected him to be a master craftsman, has a first name identical to the classification used to designate the expert assemblers. He builds GT-R engines for the street as well as Super GT300 racing versions.

How cool is that?

"If you just want to assemble GT-R engines, any skilled person can learn in three to four months, but GT-Rs are used for shopping or to drive at speeds of 320 km per hour on a racing circuit, so exact precision for each engine part is required," stated Kurosawa.

"Takumi are responsible not only for engine assembly, but also judging part quality and guaranteeing precision. Each GT-R engine is hand-made by a single craftsman - that's the difference from other engines."

It takes about six hours to assemble the 3.8-liter, 545 horsepower engine, before extensive onsite testing – finally receiving its maker’s mark when the Takumi place their seal on the engine block. It is a promise of quality as well as kansei or the understanding of how it will be used.

It is surely this knowledge of how the engine will be used and the joy the owner will thereby derive that fuels the Takumi pride.

"The GT-R owner has a special feeling towards their car, " said GT-R Takumi and owner Nobumitsu Gozu.

"Although it's an older model, I also own a GT-R, so I understand the feelings of GT-R customers and we put our souls into each engine, hoping to deliver that excitement to customers."

Izumi Shioya has spent 20 years building engines and yet still aims for perfection in each and every one.

"What I consider a 'perfect engine' is one that I am convinced will have the highest performance," Shioya says.

Not surprisingly, the people who buy these fabulous cars want to know the back-story. According to Yokohama plant chief, Nobuhiro Ozawa, the new owners want to meet their GT-R builder in person.

Some actually come to the plant in Yokohama and ask for the person who built their engine, just to say thanks for building it, face to face.

How long has it been since someone came to your office just to give thanks for doing what you do?

The name cards of the Takumi don’t even mention their status as one of the world’s great engine builders, but every GT-R engine bears their mark proudly. The names of these four masters will live on long after they are gone and the cars they help to build will bring joy to successive owners across the generations.

LG's New EV Battery Plant Is a Welcome News for Tesla
Tesla Giga Berlin's New Hurdle: It's Not Only the Gov't, but Now Tesla Itself
END_OF_DOCUMENT_TOKEN_TO_BE_REPLACED