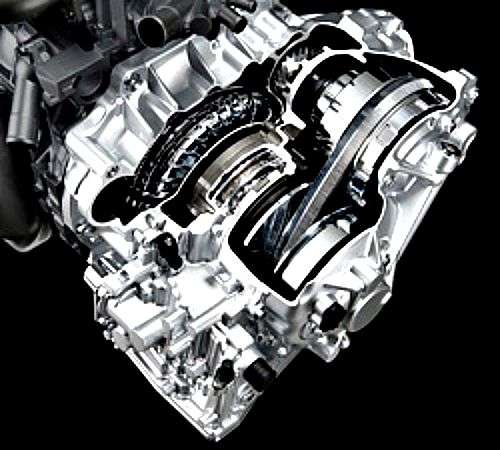 The new generation XTRONIC CVT achieves improved fuel economy by up to 10 percent compared to previous CVTs for comparable vehicles. The new transmission features a world-leading ratio coverage of 7.0, reducing friction by up to 40 percent.

Combined with Adaptive Shift Control (which adapts shifting patterns to match individual style and ambient conditions), the next generation XTRONIC CVT delivers responsive and powerful acceleration. What is more, it helps keep the engine from revving too fast and minimizes noise. The new generation XTRONIC CVT will be introduced in North America during 2012, then globally thereafter.

“One cannot say that an idea that originated over 500 years ago is new,” Martin Krüßmann, vice president of Engineering for Bosch Transmission Technology B.V. in an unrelated keynote presentation. “But Leonardo daVinci’s ideal of a stepless transmission still shows so much further potential that it is far from settled technology.”

Achieving a ratio coverage of 7.0

Combining smaller shaft pulleys with a new and uniquely shaped belt, the range of ratios between the two has been enhanced with only minimally increased axial distance. The consequent ratio coverage of 7.0 sets a new standard for CVTs in 2.0-liter-plus vehicles globally.

Reducing friction by up to 40 percent
The adoption of a smaller oil pump was enabled by reducing leaks and the necessary oil pressure level, that results from the increased interface between the pulleys and the belt. This, plus the use of specially formulated low viscosity oil, reduces friction. Further, roughly 60 percent of the components have been modified to reduce friction.

Adaptive Shift Control (ASC)
ASC senses each driver's agenda by the way he or she accelerates, as well as choices made in handling and speed. Using perceived preferences, ASC selects a gear ratio optimal to the specific conditions and the driver's intent – fuel savings or quick acceleration, for example. ASC's linear shift control gives the driver a more direct feeling of acceleration by coordinating engine speed with vehicle speed as the car accelerates.

New Hybrid Front Wheel Drive System
This new system uses an innovative approach to the challenges of affordability in hybrid vehilces. Incorporating one electric motor and a double clutch into the new generation XTRONIC CVT combined with a compact lithium-ion battery and a 2.5-liter supercharged engine results in a compact, versatile powertrain that doesn’t need a redesigned body. It produces power equivalent to a 3.5-liter engine yet with greatly enhanced combined fuel economy. Nissan plans to release a new hybrid vehicle in North America in 2013, and later in global markets.