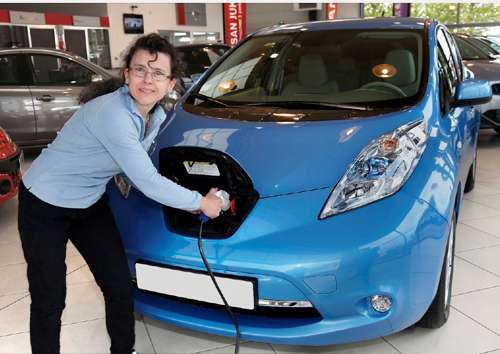 The Nissan Leaf had sold 49,000 vehicles worldwide by the end of 2012, making it the best selling EV in the world – now having sold the 10,000th model in Europe – the brand continues to wear the electric car crown.
Advertisement

Furthermore, though the Houses of Capet, Bourbon and Valois dominated the French Monarchy for over 800 years, it had nothing to do with nurse Sylvie Lailler buying the 10,000th Leaf sold in Europe.

Rather, it was based on the need for transportation to visit her elderly patients during the week and to share with her family on weekends. Being concerned with the health of others, Lailler is naturally focused on the health of the planet, after all, cleaner air helps her do her job even better.

"I purchased the car because of the low running costs really make sense for my work,” Lailler stated following her test drive. “I needed a proper family car and I wanted a zero emission vehicle to replace my diesel hatchback. The Nissan LEAF was the best choice. My family were reluctant to get an electric vehicle, but after the test drive my husband told me he wanted it to drive to work; he will not get the keys from me easily though!"

Not having to buy expensive European petrol doesn’t hurt much either. Lailler lives close to Paris and bought her new Nissan Leaf at the nearby Mantes-la-Jolie dealership.

"As a nurse I know the effect that the poor air quality in Paris has on people, so it makes me feel good to know I am not adding to that by driving an electric car, she added. “I will mostly be using it for work, driving between patients, but I am also looking forward to taking the LEAF on the Autotrain to the south of France with my family for our holiday in the summer."

The Nissan Leaf has been available in select markets in Europe since March of 2011, so it took a little over two years to reach this milestone, but the brand foresees an increasing acceptance of electric vehicles as the recharging network continues to expand.

"This is an important moment for electric cars in Europe and comes at a time where we are seeing a sales momentum building for the Nissan LEAF across the region, stated Jean-Pierre Diernaz, Nissan Europe Director of Electric Vehicles. In March we sold over 1000, which was the best month since the car was launched, and in April we were the second best selling car overall in Norway."

When the all-new 2014 Nissan Leaf debuts next month, it will feature over 100 modifications and updates based exclusively on customer feedback.

"We are seeing a shift in attitudes to electric mobility, with more people buying electric cars and the infrastructure developing at an ever increasing rate,” concluded Diernaz. “We have hit this landmark just as we prepare to introduce the new European-manufactured Nissan LEAF with over 100 improvements into the market."

Nissan may be building the last and final European Dynasty under the House of the Leaf.

Only time can tell how long this rule will last, before being dethroned by some young upstart of an electric car.

Such is the long history of Europe.