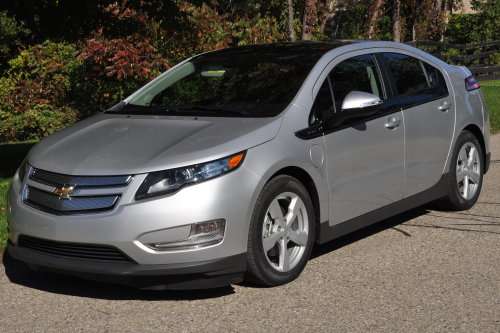 Two weeks ago the National Highway Traffic Safety Association (NHTSA) announced they would be extensively testing electric vehicles and post crash protocols pursuant to an incident in which a Chevy Volt caught fire three weeks after the vehicle was tested by the agency.
Advertisement

In continuing tests, the NHTSA has found a possible problem with lithium ion batteries despite extensive previous testing by both GM and the agency. According to an article by David Sarno in the LA Times, the NHTSA has launched an official safety defect investigation of the Chevy Volt with implications for other lithium ion powered hybrids and electric vehicles.

Reportedly a spontaneous combustion in one of the vehicles following testing resulted the inflammation of three other cars parked nearby.

“NHTSA does not believe electric vehicles are at a greater risk of fire than other vehicles. It is common sense that the different designs of electric vehicles will require different safety standards and precautions, stated a Nov. 11 release by the NHTSA. They continued to state, “In the coming weeks, in collaboration with the Department of Energy, NHTSA will conduct additional testing of the Volt's lithium-ion batteries and will continue to monitor these vehicles — as the agency does with all vehicles on our nation's roadways — should any safety issues arise.”

The agency intends to take immediate action if they find any unreasonable safety risk, including public announcements and assuring GM notifies Volt owners.

GM has been actively promoting enhanced acceptance of their plug-in hybrid, which gets an EPA equivalent of 93 miles per gallon. Over 6,000 Chevy Volts have been sold since its introduction during December of 2010. The winner of the 2010 Green Car of the Year award at the LA Auto Show, will travel 40 miles off its batteries at which point a gasoline generator starts up to power the electric motors adding 300 miles to the car’s range.

Will this act to further slow the adoption of electric and hybrid cars so clearly associated with the national goals of clearing the air, lessening dependence on fossil fuels and engendering sustainable progress?

"It's a technology-laden car, and there are still issues with batteries," Dave Sullivan, an analyst for AutoPacific is quoted as saying. The lithium ion batteries used by the Chevy Volt are just like the ones in our laptops and netbooks – known for some time to have problems with overheating. "GM's going to have to reopen their safety book to prove that these vehicles are indeed safe," he added.

GM is aware of the investigation and apparently expected it. They have been working with NHTSA to reproduce the problem for some time. The company is certain Volt owners who have not suffered a serious impact are in no danger of the spontaneous combustion of their cars.

"The Volt is a safe car," said Greg Martin, a spokesman for GM. "What occurred was what all parties set out to do, and that was to subject the battery in a laboratory setting to some of the most extreme circumstances to get it to fail."

Last week the NHTSA tested three more Chevy Volts to a crash simulation, damaging the battery compartment and causing the coolant lines to leak. One battery caught fire a week later and another started to smoke and spark a few hours after impact.

So far the NHTSA doesn’t think the Volt or similar vehicles are at an increased risk of fire compared to gas engine vehicles. All vehicles have some risk of fire after a serious crash. The agency suggests the following guidelines if an electric vehicle is involved a crash:

• Exit the vehicle if possible to await assistance of responders. If occupants are unable to get out on their own, others should stay a safe distance from the vehicle, and notify authorities.

• Emergency responders should check to see if the vehicle is electric. In such cases, they should be careful to avoid possible electrical shock and disconnect the battery from the circuitry whenever possible.

• Responders should pour on the water if there’s fire, mindful fire can erupt some time after a crash.

• Tow trucks operators and vehicle storage facilities should keep the vehicle in an open area rather than a garage or enclosed building.

• Instead of attempting to drain a propulsion battery, responders should contact the vehicle manufacturer for authoritative advice on dealing with the situation.

• Vehicle owners should not store a severely damaged vehicle in a garage or near other vehicles.