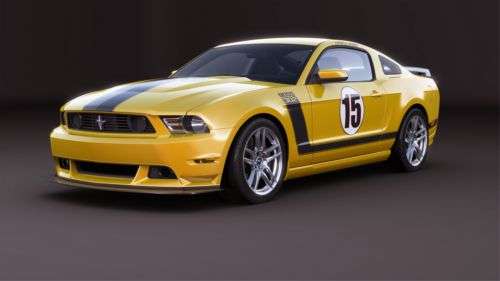 Ford Designer Melvin Betancourt has created a one-of-a-kind 2012 Mustang Boss 302 Laguna Seca for auction at a charity event tomorrow to benefit cardiovascular care, research and education at the Henry Ford Health System. He has said it was a labor of love straight from the heart.
Advertisement

Betancourt, 49, suffered a serious heart problem 11 years ago, and he credits the doctors at Henry Ford with saving his life. Consequently, he is paying it forward.

"I went to the doctor thinking I had a bad cold and the specialists at Henry Ford told me I had what is called an aortic dissection – a tear in the major blood vessel that carries blood away from the heart to the body," recalled Betancourt. "As a result, my aorta had grown to the size of a softball, and I needed immediate open-heart surgery."

If left untreated, such a condition can resulting unexpected and sudden death.

The surgery that Betancourt needed to repair his damaged heart came at great risk, but was performed successfully by cardiovascular surgeons at Henry Ford Hospital.

"There are gifted people out there who have been given the ability to do what they do," said Betancourt. "I'm here because of them."

"Everybody knows the School Bus Yellow Boss 302 that Parnelli Jones drove to victory in the 1970 Trans-Am Championship, so we decided to pay homage to that vehicle and do a modern version of the 1970 Mustang that he drove," Betancourt said.

The 2012 Boss 302 was painted yellow at the AutoAlliance International (AAI) plant in Flat Rock, Mich., where all of Ford's Mustangs are built. "The fact that the car was built and painted at the AAI plant gives it more credibility as a one-off Ford vehicle," mused Betancourt.

Only Instead of decals like the 1970 model, Betancourt painted the black Laguna Seca graphics on the car, which include "hockey-stick" stripes along the sides, Parnelli Jones' name on the side rails and No. 15 on each door.

"I approached the project from a car collector's perspective," said Betancourt. "I asked myself what would happen if they took me from today, put me back in 1970 and asked me to design a car for Parnelli Jones."

The famous Parnelli Jones will actually sign the car at the Get Your Heart Racing event, adding even more to its value as a collector's item.

The event will take place from 1:30 p.m. to 5 p.m. on the Ford test track at the Dearborn Development Center – a facility rarely open to the public – and continues into the evening with the Winner's Circle Afterglow from 5 p.m. to 9 p.m. at the Ford Conference & Events Center with dinner and entertainment, as well as live and silent auctions.

Tanner Foust himself, known as host of Top Gear on the History Channel and an award-winning professional driver in his own right will drive three guests chosen in a drawing on the Ford test track.

Parnelli Jones will also attend the reception at the Winner's Circle Afterglow. Ford President and CEO Alan Mulally will be on hand to welcome guests.

The live auction of a one-of-one 2012 Mustang Boss 302 Laguna Seca, designed by Ford Designer Melvin Betancourt and signed by Parnelli Jones is expect to be the highlight of the event. It is a modern version of the 1970 Boss 302 that Jones drove to victory in the 1970 Trans-Am race.

Other auction items also include two tickets to the 2012 American Idol finale in April (hotel and airfare included), as well as a Ford Championship Weekend VIP Experience in November, including three races, meeting Ford drivers and a personal garage and pit tour.

Proceeds from the event will benefit the Edith and Benson Ford Heart & Vascular Institute at Henry Ford Hospital in Detroit and the Center for Cardiac Care at Henry Ford Wyandotte Hospital.

For more information about Get Your Heart Racing, visit getyourheartracing.org or call 734-246-9583.