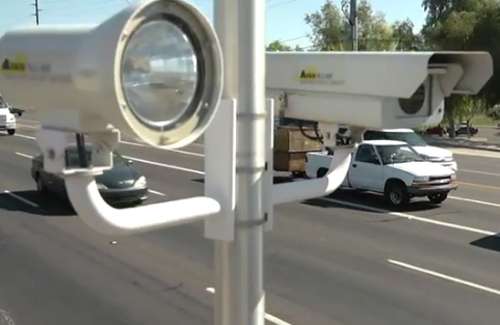 Running a red light is one of the most dangerous things any driver can voluntarily do and, according to the National Coalition for Safer Roads (NCSR), red-light cameras can reduce the incidence of the riskiest violations as much as 86 percent.
Advertisement

Despite highly vocal opponents, police departments, traffic officials, road safety advocates and other partner organizations advocate the cameras, as evidence of their life-saving effectiveness mounts in over 540 communities across the country.

"Red-light running is dangerous and all too often deadly," said Melissa Wandall, traffic safety advocate and NCSR President. "We have the tools available to reduce red-light running and positively change driver behavior. In honor of all those people whose lives were taken far too soon — including my husband Mark — I am proud to be a voice in the fight for these cameras and the crucial safety benefits they bring to our communities."

Another recent IIHS study performed in Arlington, VA revealed the number of drivers running red lights decreased significantly at intersections with cameras. The study reports an 86 percent decline in the worst violations occurring 1.5 seconds after the light turns red.

Wherever red-light cameras clearly make intersections safer, communities invariably support their use. In the Pohatcong Township of New Jersey last fall, 56 percent of the citizens voted to continue use of the cameras beyond the 2016 expiration of the initial authorization.

Florida recently reported a matching 56 percent of communities recorded a reduction in crashes at intersections with safety cameras. Furthermore, a portion of the fines identified red-light runners pay go to Florida trauma centers and research centers for paralysis, many of whom treat victims of red-light involved collisions who frequently suffer life-threatening injuries.

Melissa Wandall was largely responsible for the Mark Wandall Traffic Safety Act in Florida, honoring her husband who died the victim of a red-light scofflaw. This law mandated the camera program, as well as ensuring some of the resultant funds would go to benefit the victims of car crashes.

More on Florida's programs and the Wandall Safety Act can be seen in the video below.

"People who illegally run red lights and put everyone sharing the roadways in danger should be held accountable for their reckless actions," said Wandall. "Often these offenders will be angry for getting caught and play the victim. But the true victims are those people who lose their lives in red-light running collisions and the ones they leave behind."

That is the voice of experience speaking – one to which we all should listen and think of when we next approach a yellow light that has lingered for a count of two.

Aaron Turpen wrote on February 21, 2013 - 2:53am Permalink
Red light running, according to the FHWA.gov website, killed 762 people in 2008. Out of 7,770 fatalities in intersections that same year - barely 9% of the total. Other studies have also shown that these cameras increase rear-end collisions at lights, including one by the New Jersey DOT which showed they were up 20% and total crashes went up by nearly a percentage point at intersections where the cameras are situated. Further, the installation and cost of these cameras is not cost-effective. NJ estimates that they spent $1 million per year per intersection with four red-light cameras (one each direction) in maintenance, upkeep, and ticketing costs and did not recover that in fines. So while I feel bad for some of these people who've suffered because of others running red lights, I'm sorry if that emotion doesn't extend to wasting taxpayer money on something that isn't proven to work. At the same time, it's been proven in studies in New York that by leaving a 1.5 second delay between one direction going red and the opposing going green, wrecks in intersections are reduced substantially. A simple fix that requires a one-time reprogramming of the lights and nothing more.
Don Bain wrote on February 21, 2013 - 11:56am Permalink
I like your solution but feel people would just learn the delay was there and jump the gun. Besides, if it cost $1 million to put in a camera up in NJ, something fishy is going on. Excuse me, but there is evidence the cameras do work.
Aaron Turpen wrote on February 21, 2013 - 1:37pm Permalink
It costs $1 million to put in FOUR cameras - one for each direction of traffic. That includes maintenance costs through the year. These cameras aren't cheap - they do a little more than a $50 Nikon does. If people "learn the delay," then they're still running a red light. I doubt a camera is going to stop them either.
Don Bain wrote on February 21, 2013 - 4:46pm Permalink
Well the ones in Denver aren't so fancy and don't cost near that much to install or monitor. That's simply computerized as well like the whole traffic control system. We don't buy $4,000 hammers in Colorado either.
Aaron Turpen wrote on February 21, 2013 - 4:59pm Permalink
I can't find data on the costs on Colorado, but wouldn't be surprised if it's not also way up there. These systems aren't cheap. I do find data showing that several cities are making money from the systems, including Denver police who said theirs pulls in about $721,000 in 2010. Studies as to whether they're working in Colorado are mixed and nationally they are the same - some say they work, others say they don't and still other say they cause more harm.
Winston Bent wrote on February 21, 2013 - 8:42am Permalink
The red light cameras is a money making scam.
Don Bain wrote on February 21, 2013 - 4:51pm Permalink
You're entitled to your opinion of course, but this truly is about safety. Photo radar is more easily construed as a fundraiser, but in reality both are aimed at modifying dangerous behaviors. If humans were rational none of this would have a place in our world.
Jim wrote on February 21, 2013 - 10:22am Permalink
If you only have a hammer, everything looks like a nail. That saying applies to Ms. Wandall and her idea that red light cameras are THE solution. Personally, I think it would be appropriate for Ms. Wandall to shift her focus to a campaign against buzzed driving and teaching defensive driving. Why? The driver of the car in which Wandall's husband Mark was riding had been drinking. Not legally drunk, but buzzed. He hit the gas when his green arrow came on, evidently without confirming that opposing traffic had stopped. If he had not been buzzed he might have noticed, directly in front of him and coming straight at him, the headlights of the red light runner. The driver was Ms. Wandall's brother. You can imagine that if it had been anyone else driving, Ms. Wandall (or anyone else) would have sued the driver for his last dime. But she couldn't do that, couldn't punish her brother, so she punishes US with her hammer, red light cameras. Mark Wandall's death is a lesson for us to teach our children of driving age: Don't drive buzzed, and drive defensively. (They're connected, because if you are buzzed, you drop your defenses.) In particular, don't swing a left turn - even with a green arrow - until you've looked around. I would welcome a campaign by Ms. Wandall that focused on that particular lesson. She's a good speaker and could save a lot of lives, nationwide. And no one would have to install red light cameras.