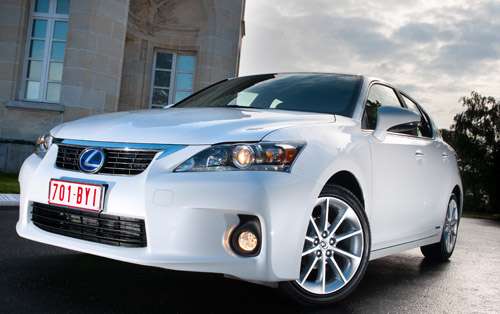 The supply of luxury used-vehicles up to 5-years-old is declining by 13% this year as compared to a 2011 and consequently the vehicles will appreciate by an average price increase of 1.9 to 2.9 percent this year due to declining inventory, according to Johathan Banks, senior analyst with the National Automobile Dealers Association (NADA) Used Car Guide.
Advertisement

Consequently, if you're lucky enough to find a 2011 Lexus CT200 on the market (as pictured at right), you're going to have to pay a little more than you'd hoped

The decline results from the 2007-2009 economic recession when fewer vehicles were purchased or leased, creating a drastic drop in trade-ins and leased vehicles returning to the market. During 2011, mainstream and luxury brand sales grew by 11 and 4 percent respectively, compared to 2010.

In the luxury sector alone from 2009 to 2011, prices for vehicles up to 5-years-old went up by about 22%, with appreciation across brands ranging from a low of 14.7% for Volvo to a high of 29% for Mercedes-Benz, according to the NADA Used Car Guide. Prices for luxury used vehicles are still at historic high levels.

"Used-vehicle prices have risen over the past couple of years because of economic conditions that lowered supply and increased demand," Banks added.

NADA expects another year or more3 of losses before used luxury vehicles begin to increase in value again. Although an upturn supply is still a ways off, the supply of returned lease vehicles could improve in the short term, according to Banks.

NADA estimates the 36-month supply of returning vehicle leases are already on the upswing, and the supply for these vehicles will grow by 9 percent of more during the second half of the year.

"This means that for the first time in years, the downside of price risk is on the horizon of 2013 and even farther out into 2014," Banks said.