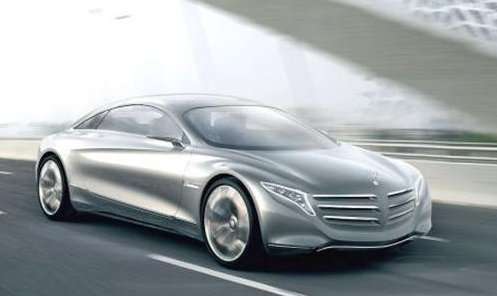 The futuristic Mercedes-Benz F125! concept incorporates many of the technological aspects one would assume to be part of a sports luxury car of the mid 2020's – sleek design, advanced telematics, an extended range, a cutting-edge drivetrain plus computer aids to driving.
Advertisement

Large luxury oriented sports vehicles of the future, like the Mercedes Benz F125! concept, will have to deal with a greener, more congested and tightly regulated world than exists today, according to Dave Guilford writing for Automotive News.

Listening to Thomas Weber, director of research and development for Mercedes' parent company Daimler AG, one would get the idea the F125! addresses serious concerns – including the future of the Mercedes-Benz S-class lineup.

Usually, according to Weber, concept cars look one automotive generation into the future. The Mercedes-Benz F125! is an attempt to peer two such generations into the future, so at an average of 7 years between major model updates we’re looking towards the mid-2020’s.

In 2025, the corporate average fuel economy (CAFÉ) requirement in the United States may be as high as 54.5 mpg.

In the European Union, they are getting ready to inact a corporate average of 130 grams emitted per kilometer driven or 7.4 ounces per mile by 2015, with a stated goal of 95 grams per kilometer (5.4 oz./mile) by 2020. In contrast, the current average for European vehicles was 154 g/km (8.7 oz./mile) in 2008, according to the European automotive industry association, ACEA.

Such limits will place increased pressure on the builders of large gas-powered cars such as the S class. The line encompasses a wide variety of vehicles, however the 2012 S550's U.S. fuel economy ratings are 15 mpg city and 25 highway. Information on a Daimler Web site, CO2 emissions for European S class vehicles range from 149 g/km (8.5 oz./mile) for the S250 CDI Blue Efficiency to more than 300 g/km (17 oz./mile) for AMG performance models.

To meet the more stringent requirements of the future, Daimler has deduced electric drive must be part of their plan. "If zero emission mobility will be necessary, and that's what we believe, it's clear we have to change to electric mobility," Weber said.

Still, most car buyers will want the power and range of their traditional combustion vehicles, putting a problem into the mix. "The most important key figure was 1,000, a range up to 1,000 kilometers [621 miles] completely emissions free," he said. "That's what we think will be necessary in 2025."

Given the requirements of electric drive and long range the solution is a fuel cell vehicle, in Weber's way of thinking. The Mercedes-Benz F125! fuel cell is used to drive four electric motors one at each wheel. Daimler made the F125! a hybrid to produce the handling and performance of the current S class, specifically quick starts and acceleration, Weber said.

“Where a fuel cell vehicle needs about 10 seconds to start, he said, with the plug-in fuel cell hybrid, "you get exactly the same feeling you know from your car today."

To accomplish this, the Mercedes-BenzF125! Is based on new and unproven technology. In the concept, leaky cylindrical hydrogen storage is replaced with a system still in research – a new Kevlar-like material used to store hydrogen in body cavities, increasing onboard hydrogen capacity and range.

The Mercedes-Benz F125! would also use still another untested method, a lithium-sulfur battery to increase energy density. Weber says this sort of battery chemistry will probably debut during this decade in small applications such as power tools.

"These two technologies are advanced, next-generation technologies, but they are not in the heavens," he said. "It's clear what kinds of technologies we are looking for. We believe as a visionary forecast in 2020, 2025, these kinds of cars are possible."

It is generally accepted as fact that lithium-ion powered EVs will never have the range of traditionally gasoline engines. Consequently, new technology is required to recreate the power, performance and range of the Mercedes-Benz S-Class in an EV.

Anonymous wrote on November 19, 2011 - 12:32am Permalink
I guess its far too futuristic since 2025 is more than a decade from now and we can expect that other car models will have significant improvement over time including <a href="http://www.car-stuff.com/mercedesparts.htm">mercedes parts</a>.