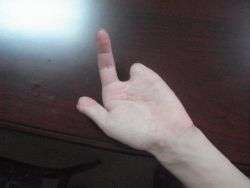 Making 80 cents an hour for a 14-hour day and having to work with safety systems off leaves some Chinese workers maimed by the machines they operate. Compensation for three lost fingers - $7,430. Those with injuries too severe are summarily let go.
Advertisement

The reason is obvious why many manufacturers have moved their fabrication operations to Asia is the availability of hordes of workers competing for low-paid positions. Workers in China have never even heard of a union and should someone get the idea, they would no doubt be treated just like the democracy movement in Tiananmen Square was just over 20 years ago.

At the Yuwei Plastics and Hardware Products company in Dongguan, China, where 80 percent of everything they produce is bought by Ford, laborers get 80 cents an hour, working 14-hour shifts seven days a week. During peak production they may work 30 days a month.

Like we’re learning in America, you take work when and where you can get it and take nothing for granted ever. Prospective hires at Yuwei Plastics are told they must work hard and endure hardship.

Since when does losing fingers or being maimed count as a simple “hardship?”

On March 13, 2009, 21-year-old Worker "A," had three fingers and knuckles torn from his left hand when it was crushed in a stamping machine. He was making "RT Tubes" for export to Ford.

Management deliberately instructed him to turn off the infrared safety monitoring system so he could work faster. "We had to turn it off. My boss did not let me turn it on," he said. He had to stamp out 3,600 "RT Tubes" a day, one every 12 seconds.

Worker A was compensated just $7,430 for the loss of three fingers, leaving his hand with only a thumb and forefinger. Workers Compensation in the U.S. for a similar accident would result in a $144,292 payment.

It is a reality that if you work in a machine shop, as I did as a young man, lost fingers are a fact of life. Several of the men at Westholt Manufacturing, where I worked, were missing fingers, but still had their jobs.

The Institute for Global Labour & Human Rights (formerly National Labor Committee), who filed this report today, has only identified four such incidents over the last several years out of an unknown number of workers, so the problem is not extensive.That matter's little to Worker A.

"While millions of democracy advocates are launching protests across the Middle East and North Africa, workers at the Yuwei factory have never heard of a 'union' and have no idea what a union is or how it could help them," said Charles Kernaghan, director of the Institute for Global Labour & Human Rights (formerly the National Labor Committee).

Kernaghan is kidding himself if he thinks labor unions are the answer to China's problems - they would have no chance at all under the current regime.

As China begins to export cheaper vehicles to the rest of the world, human rights issues such as this are likely to get more attention.