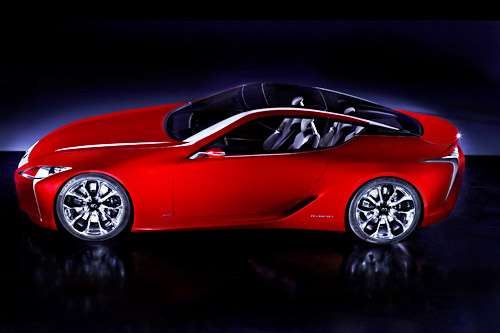 Is the Lexus concept car coming to NAIAS a hybrid?

As images have been slowly released, Torque News has speculated on what the new Lexus concept car coming to NAIAS next year will ultimately be. It has been correctly assumed, judging by the lines and form of the teased images, to be a new sports model, but no one had as yet imagined it might be a hybrid.
Advertisement

The full image of the Lexus LF-LC 2+2 sport coupe concept car, at right, when magnified to reveal the lettering, clearly shows the chrome letters HYBRID on the lower body between the rear air scoop and the right rear tire.

So does this involve the expectation most luxury sport cars five years from now will be hybrid? It is an interesting query.

The sleek, seductive coupe also appears to have a transparent roof, suggesting it will employ the same nanotechnology utilized by German manufacturers to create a transparent roof that turns opaque when a current is passed through it.

The seats, though of a bolstered, form-fitting shape, clearly show the abbreviated leg room of the rear seats, appropriate only for children between the ages of cars seats and adolescence.

Remarkably it does not seem to have the spindle grille that is the current trademark of the design direction Lexus is taking, but one can see elements of the LFA DNA in its body and trunk lines.

Obviously smaller than the GS line and more in line with IS models, the LF-LC presumably will couple a high-output six cylinder engine with a powerful, low torque electric motor, producing rapid acceleration off the line and sustained performance at high speed.

Therein lies the problem with such concept cars – you have so many years of anticipation, it’s hard for the eventual reality to live up to its imagined glory.
Teased though it may be, we’ve already seen enough to want to drive it and it’s not even in production yet. Such is life.