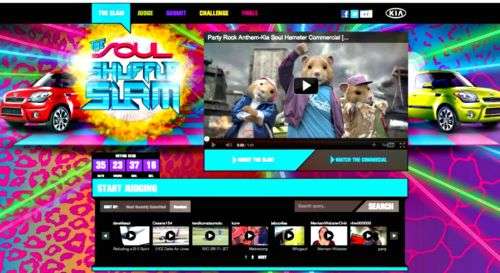 The Kia Soul Shuffle Slam invites dancers to party rock and showcase their moves in electro-pop group LMFAO-Inspired dance videos following the debut of the new "Share Some Soul" ad that has been viewed more than three million times on YouTube. Contestants have the opportunity to win $10,000 and to dance on stage with LMFAO.
Advertisement

Kia Share Some Soul advertising campaign features the brand's music-loving hamsters shufflin' to the beat of the smash hit Party Rock Anthem. Kia is now inviting dancers the world over to join the party and participate in a LMFAO-inspired dance video submission contest.

Hosted on the Kia Soul YouTube and Facebook channels, Kia Soul Shuffle Slam contestants will vie for the Grand Prize – $10,000 and an onstage appearance with the wildly popular electro-pop group LMFAO by submitting videos of themselves moving to Party Rock Anthem.

Share Some Soul
is the ad you’ve seen wherein the lovable hamsters burst onto the apocalyptic scene in an Alien Green Kia Soul, with Party Rock Anthem blasting out of the Kia’s 350-watt sound system. As they dance to the sound of the song that was number one on Billboard’s hot 100 for six full weeks, they quickly capture the attention of the warrior robots, who begin to do the Kia Soul Slam Shuffle – only not as well as the Kia Soul Hamsters.

“Soul’s immense popularity is due not only to its unique styling, wealth of technology and convenience features and overall value, but also to the role that music has played in our marketing efforts for this vehicle,” said Michael Sprague, vice president, marketing & communications, KMA. “LMFAO is a fun, energetic and exciting group, and just like the Soul has done since its launch in 2009, they pride themselves on standing out from the crowd. With the 2012 model year featuring increased horsepower and fuel efficiency, it makes perfect sense to extend our partnership with LMFAO by inviting dancers from all over the globe to show us their best shuffle for the opportunity to win some $10,000 and the dance opportunity of a lifetime.”

As part of the contest, visitors to the Kia Soul YouTube and Facebook channels will be able to vote for their favorites, helping to pick the contest's finalists. Four finalists will move on to the Kia Soul Shuffle Slam Showdown, where the videos will be judged by LMFAO's very own Redfoo and SkyBlu along with members of the popular dance team, Quest Crew. Participants can also connect the Kia Soul Slam Shuffle to their Facebook account and send dance challenges to their friends, as well as leave comments on the contest page via their Facebook and Twitter accounts.

Frankly, we can wait to see what Kia and KMA come up with for Halloween and Christmas.