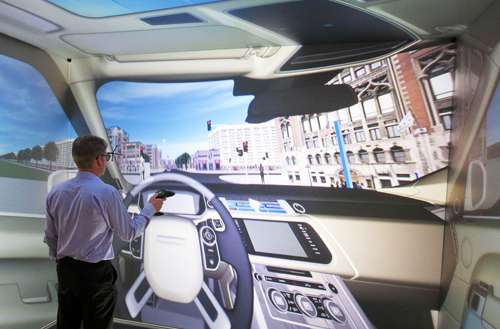 The Right Honorable Member of Parliament and Secretary of State for Business, Innovation and Skills, Dr Vince Cable, announced the partnership, indicating these five research projects are merely the beginning of a long range plan to develop world leading virtual simulation technology in the UK.

In Aldus Huxley’s Brave New World, the author predicted the development of The Feelies, a sensory experience adding aromatic and tactile sensations to visual imaging.

In the film Strange Days, the screenplay by James Cameron and Jay Cocks presupposes the development of a means of recording sensory experience so that others can relive it in first person immersion.

Called a Superconducting Quantum Interference Device or SQUID, the type of virtual reality expected to come from Jaguar Land Rover’s investment would produce the first level of development between these two concepts, adding sound and smell to visual immersion.

"With world-class universities and cutting edge companies like Jaguar Land Rover, the UK is well placed to be at the forefront of driving innovation and developing new technology,” stated Dr. Cable. “This investment will support the Government's industrial strategy by boosting the UK's manufacturing capability and helping to keep us globally competitive."

Jaguar and the ESPRC will be working with academics and engineers at Loughborough University, University of Leeds, University of Cambridge and the Warwick Manufacturing Group.

The total funding for the project will be shared among the entities involved, with Jaguar Land Rover and ESPRC each kicking in $6.24 million and the others picking up the difference.

As the two phase project begins its five year run, most of the initial funding will go into the five projects announced this week, which include:
• Multi-physics and multi-functional simulation at Loughborough

• Visualization and virtual experience at the Warwick Group

“While we already utilize a wide range of sophisticated virtual engineering tools and processes to design, engineer and test our new vehicles, we are keen to enhance the future capability of virtual simulation and tailor them for automotive product development,” said Bob Joyce, Jaguar Land Rover Engineering Director, “We want to make advances in the simulated driver and passenger experience, including more realistic imagery, sounds and even smells. These projects will help us analyze increasingly complex cars at whole vehicle, system and component levels, as well as enhancing the high performance computers that industry will use in the future to mine increasing amounts of more complex data.

"Jaguar Land Rover believes the UK needs to be globally competitive in industrial innovation. Collaboration between Jaguar Land Rover and academia to develop new automotive applications will give the UK an opportunity to take a lead in virtual simulation technology,” Joyce concluded.

Though none of the above institutions have anything to do with the Hogwarts School of Witchcraft and Wizardry, we would not be surprised if something magical results from all this.

The fabulous 2014 Jaguar F-Type Sports Car was developed over the last 10 years with only the tools on hand. We can only wait with ‘bated breath to see what the brand will dream up with this new software across another decade.

The mere thought sends the blood coursing through the veins like any Jaguar winds through the most twisted roads to get to the heart of the driving experience.

Can you feel the heat?