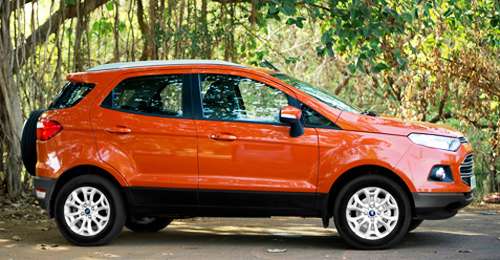 Ford has just introduced the innovative, all-new EcoSport with a 1.0-liter 3-cylinder EcoBoost engine, hoping to spark sales in the second largest Asian automotive market and the sixth largest sales region in the world.
Advertisement

The so-called urban utility vehicle debuts during a cooling off economic period, which created the first drop in annual auto sales in over a decade in the Asian nation. The all-new EcoSport has been redesigned for the road and economic conditions of India and was based on the highly successful model that has sold over 700,000 units in South America since 2003.

Built upon Ford’s global B-segment platform, the Indian variant of the Ford EcoSport is targeted at young professional males, married with a child and an active lifestyle that demands all types of urban and rural driving.

Though Ford’s sales in India dropped off 38 percent year over year in March, the brand expects the majority of its market share growth to come from sales in Asian Pacific and African nations over the next decade, according to CNBC.

Automotive sales dropped by 6.7 percent to 1.9 million units according to the Wall Street Journal. The reasons for the decline include inflation, rising interest rates and gasoline prices, though notably diesel fuel costs just over three fourths as much as regular gas in India.

The 1.0-liter three-cylinder engine, both the smallest and first EcoBoost to be introduced in India, is said to deliver the torque and output of an equivalent 1.6-liter petrol engine. Its 44-mpg efficiency plus 123 horsepower and 125 lb-ft of torque, from an engine small enough to sit on a piece of paper 8.3 by 11.7 inches, puts this into perspective. Those statistics add up to the highest power density of any engine ever built by Ford.

“We believe our customers will be delighted by how the junior member of the EcoBoost engine family punches above its weight,” said Kumar Galhotra, vice president, Product Development, Ford Asia Pacific. “When they start and drive the Ford EcoSport, they will notice how quiet the engine is, how quickly the SUV accelerates, and how little fuel it needs.”

Furthermore, they have overcome the inherent lack of balance in a three-cylinder engine thanks to the combined efforts of over 200 engineers. Most other three-bangers utilize a counter-rotating balancing shaft to eliminate vibration, but this approach wastes fuel.

Ford pulled an unbalancing act to solve the shaking syndrome – using the pulley and flywheel precisely weighted to counteract the inherent vibration of the engine, redirecting in a less noticeable direction. Ford’s engine mounts for this EcoBoost marvel are designed to decouple, absorbing the shaking of the engine.

The 1.0-liter EcoBoost engine is so revolutionary it won designation as the 2012 International Engine of The Year by the largest margin in history.

In addition to its efficiency, the Ford EcoSport boasts keyless entry, push-button starting and Hill Launch Assist, plus parking sensors to help judge vehicle distance from nearby objects. It comes with Ford SYNC and all of its phone and music features, plus the bonus of emergency assistance, adding to its competitive value in India.

Other notable features include 20 storage niches with a total cargo volume of 21 liters. The glove compartment can hold an entire six-pack of beverage cans, while a drawer under the left front seat will accommodate laptops or netbooks, and numerous others niches help contain the modern accessories of life.

Rear seats recline for comfort or can be folded down to tumble up against the front seats, creating a cargo space of nearly 200 cubic feet. Of course the rear seats split 60/40.

The vehicle will be built at Ford’s Maraimalai Nagar plant near Chennai where Ford recently poured $142 million in the plant to enable the fabrication of the urban SUV. Particular attention has been paid to quality control and testing procedures ensuring the production of reliable vehicles.

Ford has designed a highly competitive product in the all-new EcoSport, well positioned for dynamic performance within India’s current market conditions. A slowing economy will create pent-up demand there just as the recession did here, but the slump in Asia is likely to be of shorter duration.

Notably, the Reserve Bank of India has shaved a full percentage point off interest rates over the last year, and when the buyers return to market, Ford seems ready with an exciting new product to sell by the carload – the innovative and efficient EcoSport.

“We’re bringing the best of Ford to India. The all-new Ford EcoSport is a global product with world-class quality, and we are excited to produce this at our Chennai facility to meet both domestic and international demand,” said Joginder Singh, president and managing director, Ford India.