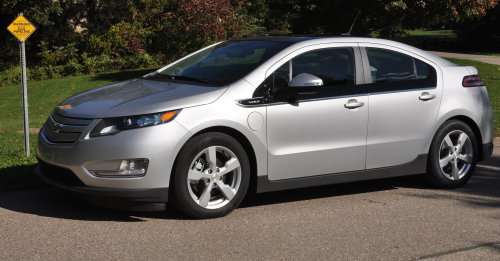 GM techs zeroing in on Volt fire cause, solution

The glycol solution used to cool the batteries in the Chevrolet Volt’s is the most likely cause of the fires that broke out in the cars after government crash tests, an informed yet unnamed source has reported. Apparently the coolant crystallized over time, causing an electrical short that sparked the fires, based on preliminary reports.
Advertisement

According to a report in the Washington Post, GM engineers are working on internal changes to strengthen the battery pack of Chevrolet Volt. They are further looking at how to reinforce the body to increase resistance to side-impacts.

The chemical reaction in the battery is not the cause of the fires and engineers believe by stopping the coolant from leaking, the fires will stop, the source stated.

A later post on Newsday states the repairs GM is considering involve laminating circuitry in the Volt's 400-pound battery pack, as well as reinforcing the case around the lithium-ion battery plus adding leak protection to the coolant system – all in the event of a severe impact.

This story goes on to say there may be a relatively simple fix implementable by GM dealerships, sparing the automaker the cost and saving face from an extensive and highly publicized safety recall.

The Chevy Volt is a symbol of GM’s determination to take a leadership role in fuel economy and environmental stewardship. The Volt’s gas-powered 1.4-liter generator provides added range to its battery life of about 40 miles.

GM techs are slated to inform senior management by week’s end on the possibility of a relatively low-cost fix for the 6,000 Volts now on U.S. roads, one sources reportedly stated.

The cost of the fixes under consideration could add up to less than $9 million for GM or roughly about $1,000 per Volt, including labor for repairs at dealerships, however the costs may rise if government regulators demand a more involved solution.

To ameliorate any damage to their reputation GM has offered loaners to any of their buyers concerned about the problem. According to a post on AutoGuide, only 33 people have responded to the offer.

So far the NHTSA has no intention of taking away the Chevy Volt’s five-star safety rating. As a GM executive has pointed out, Chevrolet is not the only automaker with liquid cooled lithium-ion batteries. Thus, the American saga of the electric car continues.