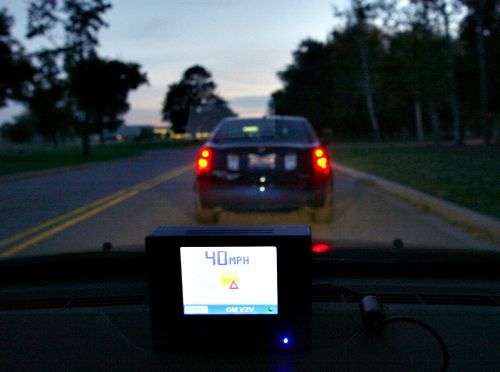 Most of present safety systems are designed to mitigate the effects of a collision rather than preventing it in the first place. This new data networking approach could help prevent crashes altogether. The technology, called vehicle-to-vehicle and vehicle-to-infrastructure communication systems could help avert nearly 81 percent of all U.S. vehicle crashes, according to a study by the National Highway Traffic Safety Administration.

“These safety systems could provide a significant leap in automotive safety, but their effectiveness goes up dramatically as more people use them,” said Don Grimm, senior researcher for GM’s Perception and Vehicle Control Systems group. “By putting the technology into portable devices, we could make this potentially life-saving technology widely available and more affordable.”

GM is approaching this breakthrough system via two modus operandi: one is a transponder the size of a GPS unit and the other utilizes a smartphone app tied to the vehicle information display. GM is demonstrating the new technology this week at the Intelligent Transport Systems World Congress in Orlando.

The transponder unit features its own display screen. The smartphone app connects wirelessly to the audio and video components to incorporate notifications into the automobile systems and displays.

The embedded system, portable transponder and smartphone technologies all use Dedicated Short-Range Communications (DSRC), to transfer data with an omnidirectional communication range of one-quarter of a mile. The DSRC can communicate two-way with other nearby vehicles, as well as transponders connected to traffic signals or construction zones.

Critical information can be provided by these systems using basic location data. If the driver leading a column of vehicles hits the brakes, those following would automatically get a warning. Two cars or trucks approaching an intersection could be warned even before the drivers see each other.

When fully connected to the computer system, such devices also can relay information collected by sensors throughout the automobile. For example, the sensors activating electronic stability control, could alert nearby drivers about hazardous road conditions ahead.

“The technology we’re testing right now is a viable solution for providing crucial safety information to drivers,” Grimm said. “Instead of just seeing what’s right in front of them, drivers will be able to know about the truck a quarter-mile ahead that’s stalled in their lane. Later this decade, smartphones, transponders and embedded systems could be working together to make our roadways safer.”

GM is working to embed these new systems into their new vehicles, GM researchers are also looking for ways to retrofit automobiles already in use.

There’s a brave new world rapidly approaching – and you’ll know about it in advance thanks to TorqueNews.

Tsingshan's Threat to Tesla: EV Maker Is In Battery Crosshairs
Tesla-Funded Research Reveals One of The Biggest Mysteries of EV Battery
END_OF_DOCUMENT_TOKEN_TO_BE_REPLACED