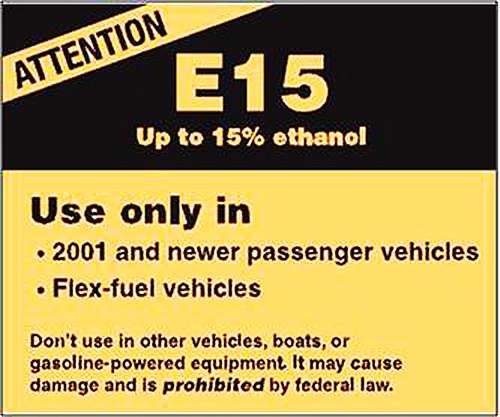 The gas that can kill your car is called E15

Caveat emptor is the legal phrase admonishing buyers to beware and the new blend of alcohol and gasoline known as E15 only reinforces that statement.
Advertisement

While a 10 percent blend of gasoline with ethanol, known as E10 or gasohol, has been used for years to lessen winter smog with no distinguishable harm to engines, boosting that mix up to 15 percent is another story entirely.

Of the 240,000,000 cars on the road, 95 percent of them can be seriously damaged by the use of E15 gasoline according to the manufacturers themselves, claims AAA.

"It is clear that millions of Americans are unfamiliar with E15, which means there is a strong possibility that many motorists may improperly fill up using this gasoline and damage their vehicle," said AAA President & CEO Robert Darbelnet. "Bringing E15 to the market without adequate safeguards does not responsibly meet the needs of consumers."

A convenience store in South Austin TX had some sort of fueling problem last summer, causing cars to stall out within blocks of the station. Though an explanatory posting never came, we suspected a refueling truck had mistakenly put E85 into an underground tank meant of E10 gasohol.

Obviously, E85 gas is meant only for Flex Fuel vehicles, but a nearby gas attendant told us customers occasionally put it in normal vehicles in an unwise effort to save money when refueling.

Though just an addition of five percent more ethanol, the sustained use of E15 can potentially cause accelerated engine wear and/or failure, damage to the fuel system, and perhaps even more troubling, false check engine alerts on any of the 228 million vehicles not approved by manufacturers to use E15.

More importantly manufacturers are already stating that the use of the fuel may void warranties.

BMW, Chrysler, Nissan, Toyota and Volkswagen have unequivocally stated their warranties will not cover fuel-related claims resulting from E15.

Is this what a new car owner wants to hear or play around with? No way, José.

In fact the fuel is only recommended for flex-fuel vehicles, Porsches built from 2001, 2012 and later GM vehicles and 2013 model-year Ford vehicles, covering cars, light-duty trucks and SUVs.

So much like war, “What is it good for?”

"The sale and use of E15 should be suspended until additional gas pump labeling and consumer education efforts are implemented to mitigate problems for motorists and their vehicles," continued Darbelnet. "Consumers should carefully read pump labels and know their auto manufacturer's recommendations to help prevent any problems from E15."

The EPA approval of E15 was heavily promoted by corporate corn growers, over the objections of auto manufacturers, in a drought year that lowered corn production so much, cattle are being feed ground cornstalks to save money.

Gas prices are holding a bit lower these days as the economy improves, so why let E15 kill your car?

There’s just no sense to it at all.

John Goreham wrote on November 30, 2012 - 5:46pm Permalink
Well said.
Turbofroggy wrote on December 1, 2012 - 12:05am Permalink
Oh no, E15 will cause your car to burst info flames! Oh wait 266,000 gas cars burst into flames a year with existing gas. What a bunch of crap. This is all being backed by oil companies that don't want to see their demand reduced by another 5%. The same dumb excuses came out of the woodwork when they originally proposed removing lead from gasoline. E15 will not harm 99% of the vehicles on the road, they need to just do it.
Charles Ashby wrote on April 30, 2016 - 8:41am Permalink
So Turbofroggy where do you get your information from comic books or are you a lackey for the ethanol industry. I tend to follow the information coming from originations such as the AAA and the auto companies. Owning a Mercedes I will follow what they say much more than a comment on the internet. I also own a 1956 classic car and always need to be concerned what goes in the gas tank
jimmy-z wrote on December 1, 2012 - 6:14am Permalink
no, actually it will cause engine stalling and necessitate the need for a full fuel system cleaning and often the replacement of O2 sensors and several other downstream sensors. Modern computer controlled fuel systems require specific fuel formulas to work properly, fouling up the sensors leads to markedly decreased fuel milage which will cause more fuel to be burned until the fouled sensors are replaced and the system cleaned. Check the price online for a ford flex fuel sensor. (the little probe that tells the computer how to best burn the fuel) Hint: around 700 dollars!!! Easy to see why AAA is concerned as well as the automakers who will get the blame when people start having to do hundreds or thousands in repairs..
Dan wrote on December 1, 2012 - 8:17am Permalink
No Jimmy it (E15) will NOT cause engine stalling etc.. total nonsense. Ethanol actually CLEANS the fuel system..when you buy a commercial tank, fuel injector cleaner at the Store the cleaning agent IS Ethanol /Alchohol What ethanol will do is make cork gaskets swell and leak.. we found that our when gasahol (e10) was first introduced in the 1970's ..that's why the Auto Industry no longer users cork and certain rubbers in their fuel systems anymore..and haven't since the early 1980's So yes if you are running around town in a 1972 Bel Air..yeah you probably shouldn't be running E15 ... BTW..there are only around 40 Stations (out of 170,000) in the Nation that even sell E15.. I run and have run E40- E60 (40%-60% ethanol) in a 2007 Malibu (2 years) same with a 1996 Chev Blazer, 2002 Ford Explorer as well , 1994 Ford Ranger , and 2003 Suzike Aero ..all of them NON Flex Fuel Vehicles as well as E85 in a 2010 HHR FFV
Don Bain wrote on December 1, 2012 - 5:09pm Permalink
Interesting testimonial, Dan. Good to hear some empirical input from someone with experience with the stuff. Thanks
Paul wrote on December 4, 2012 - 4:08pm Permalink
And tough cookies to those of us with '72 Bel-Airs, right?
Glenn Sears wrote on October 8, 2018 - 2:43pm Permalink
They didn't even make Bel Air's in 1972
Paul wrote on December 4, 2012 - 4:08pm Permalink
And tough cookies to those of us with '72 Bel-Airs, right?
FCWC wrote on June 16, 2015 - 2:35pm Permalink
This is some of the most absurd BS I've come across. Since the mandate of the usage of OBD II in 1996 - all cars can run off E85. (Flexible fueling...) Your ECU controls your air to fuel ratio. IF you want to run car on E85 - reset your ECU. This is PROBABLY the cause for the case posted about in Texas - along with pre OBD II cars. And just to literate- CORN IS (one of) THE WORST THING TO MAKE ETHANOL FROM! We SOCIALLY subsidize CORN farmers (socialism people!)