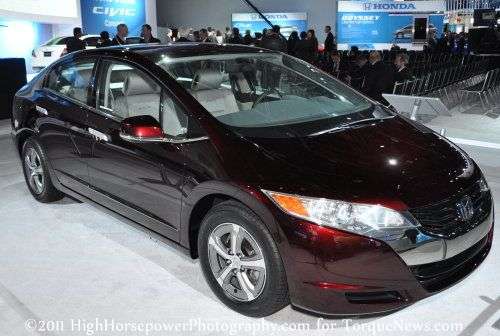 The future of hydrogen-fueled vehicles not burning so bright

Just a few years ago auto manufacturers, scientists, engineers and even energy authorities were all talking about the promise of hydrogen and fuel cell propelled vehicles. It was an idyllic idea to keep combustion engines and simply burn something in them that would only emit pure clean, potable water right out of the tailpipe. However the application of what seemed a promising technology may have hit a snag.
Advertisement

There are essentially two types of hydrogen powered vehicles: those that burn hydrogen in combustion engines and those that use fuel cells to produce electricity to drive an electric propulsion system.

The combustion-based vehicles utilize either liquid or gaseous hydrogen, each of which presents their own drawbacks.

At a media presentation, last year BMW brought their liquid hydrogen based test model to Schomp BMW in Highlands Ranch CO. Though this vehicle looked and performed much like a BMW should, the trunk was virtually eliminated by a large liquid hydrogen tank that had to be kept cool and highly pressurized to keep the hydrogen in liquid form.

This required the tank to be vented to release excess pressure in response to temperature changes within. Consequently the fuel stored in your tank is constantly leaking into the air.
If you took a flight to Tahiti for three weeks, leaving your fully fueled hydrogen beamer in the garage, it would be empty when you returned.

If the garage didn’t vent the hydrogen into the surrounding air, the whole thing might explode when you pushed the button for the door opener. If you remember eighth grade science, hydrogen explodes violently when mixed with oxygen.

The gaseous version adds a lot of weight to the car for the heavy-duty pressure tank and both present the problems of production, distribution, storage and an expensive infrastructure.

Fuel Cell Vehicles (FCV) have also run into interference, though Honda has leased at least 10 models since 2009 in Los Angeles where there are already 16 fueling stations.

“But high development costs and implementation hurdles have kept fuel cell vehicles out of the mainstream for now,” reads a report posted HealthNewsDigest.com and attributed to Earth Talk. “And in the face of competition from a new crop of all-electric and hybrid-electric vehicles lately, some analysts wonder whether the fuel cell’s future is as bright as once thought.”

The simple fact is the act of creating pure hydrogen via electrolysis consumes half the resulting energy value. When that elemental gas is stored in a fuel cell and mixed to create electricity, half the energy value is lost again. Production from natural gas is similarly inefficient.

The article quotes Richard Gilbert, co-author of the book, Transport Revolutions: Moving People and Freight without Oil, as stating “This means that only a quarter of the initially available energy reaches the electric motor,” reports Gilbert. “Such losses in conversion don’t stack up well against, for instance, recharging an electric vehicle like the Nissan Leaf or Chevy Volt from a wall socket – especially if the electricity can be initially generated from a renewable source like wind or solar.”

Nevertheless, the hydrogen-powered vehicle is not entirely dead in the water and may yet be a solution in decades to come.

GM is working on setting up a hydrogen vehicle infrastructure in the most fossil-fuel dependent state in the nation – Hawaii. They intend to establish 20 fast hydrogen-refueling stations there by 2015.

For now, the bloom is on the electric and plug-in hybrid vine and that trend is likely to play out over the next 20 years.

What happens beyond that? Your guess is probably just as good as mine.

Ben wrote on May 3, 2011 - 12:21am Permalink
Don't throw aside ......yet, fossil fuels! A new, surprising, very simple architecture, supper efficient split cycle internal combustion engine is on its way. Any clarification? please don't hesitate to ask for.
joe wrote on May 5, 2011 - 7:29pm Permalink
these types of cars are just to comlcated, cost to much to mfg. just get a electric that is the right thing. there updatable inexpensive relible.
Revitol scar re... wrote on July 5, 2011 - 7:39pm Permalink
Hydrogen-fueled cars can be the best answer to high price of fuel. But they should just try to make some "final touches" so they can burn bright, so to speak!
is AthleanX a scam wrote on July 11, 2011 - 4:23am Permalink
How about a Biodiesel engine? It can save you more money, you know. If this type of engine can be installed, it could even help save the environment aside from saving money!