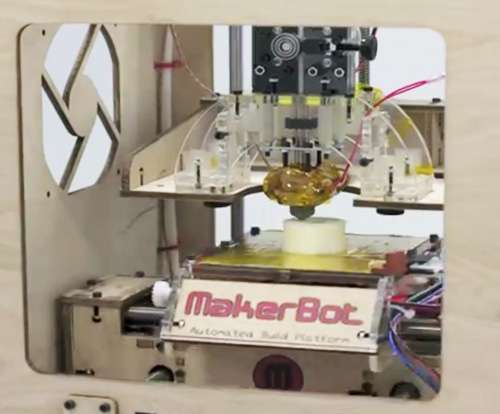 Though it sounds like something out of a Dr. Seuss book, Ford’s MakerBot Thing-O-Matic is like a printer that creates three-dimensional models out of sand or plastic, allowing a part designed in Silicon Valley to be output in physical form by an engineer in Dearborn, creating an instant prototype of the part.
Advertisement

Though the registered and trademarked device is called a 3D printer, perhaps it should be referred to as a replicator, as that is what it does – it replicates the size, shape and contours of a design part in actual size, within the limits of the machine, of course.

It’s not as though you can just take the new Transit Van and hit copy and have two of them – at least not yet. Nevertheless, just to learn how to use the process, Ford engineers used it to output a miniature Model T and a couple of tiny superheroes.

Check back in fifty years or so on the concept of copying entire vehicles.

“We’ve been shifting from the tangible world to the computer world, and the reality is that a hybrid model works best,” says K. Venkatesh Prasad, senior technical leader, Open Innovation, and a member of Ford’s Technology Advisory Board, Research and Innovation. “There is nothing like having a tangible prototype, but it has always been time consuming and expensive to create.

“Now, at the press of a button, you can have the product or component at your fingertips,” he added. “With a model in one hand, you can then input your changes back into the computer model. The best decisions are made from the highest quality engineer and at the best pace.”

The MakerBot is a relatively simple device costing under $1,000 and with a growing online cadre of enthusiastic users. It is primarily the toy of independent entrepreneurs and hobbyists, allowing design and production prototypes to be created of various plastics or sand. Ford utilizes the quick and low-cost 3D output for small parts development – shift knobs, gauges and display modules, for example.

It takes about three hours for the Thing-O-Matic to create one of the shift-knob sized pieces in the video above. It allows design variations to be output and directly compared on a tactile, ergonomic basis.

“We encourage our engineers to have the same entrepreneurial and creative spirit that started this movement,” says Prasad. “When we first got the machine, we made a scaled-down replica Model T and engineers have even made superheroes. We like that people are having fun with it and experimenting for it is that type of creativity that will lead to great uses and discoveries.”

Current State of the Art
Ford is using this new technology to bridge the gap between a concept and its actuality. Larger, industrial rapid-prototyping machines are speeding innovation in manufacturing and Ford has fully embraced commercial 3D printing.

Such 3D printing with sand allows the brand to cast patterns and cores with multiple printers on hand and Ford has taken a lead in the use of this process.

The system allows the quick, real world comparison of design variations, speeds the selection of the design that will ultimately be produced in mass, thus improving efficiency and cutting the time to market, while boosting cost savings at the same time.

It was also used to enhance the EcoBoost four-cylinder engines for the Louisville built 2013 Escape.

It was further used to model exhaust manifolds on the 3.5-liter EcoBoost for the F-150.

The shape of things to come
Before too long, this process may enable the production of a useable replacement of a part on your refrigerator. By scanning the barcode or a model number, a rapid manufacturing machine may be able to output the needed part.

“Many have referenced this technology as ushering in a third industrial revolution,” says Harold Sears, Ford additive manufacturing technical specialist. “While that is yet to be determined, we do know manufacturing is continuing to go digital, the speed of these technologies is increasing, and the variety of materials is expanding. This all leads us to believe the potential of micro-manufacturing presents great opportunity for the manufacturing industry overall.”