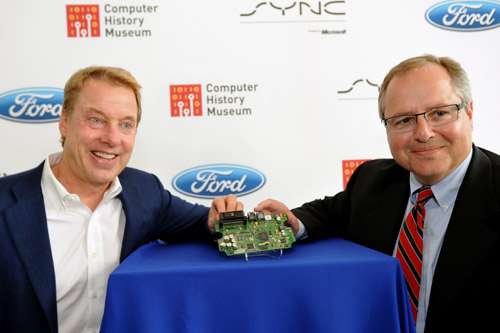 The Ford SYNC software interface that enables voice control of mobile phones and digital music players via Bluetooth or USB plugs has been inducted into the Computer History Museum in Mountain View CA.
Advertisement

The museum itself is a monument to the forces that have changed our world and daily lives by tracing the development of computers back to the abacus and forward into the digital age, with displays of artifacts and interactive information programs plus cyber-exhibits available worldwide.

Physical exhibits illustrate and illuminate the evolution of the Internet, the movers and shakers of the Digital Age, the development of microprocessors, the prescient work of Charles Babbage, and the rise of Silicon Valley among other fascinating displays.

Interestingly, Babbage designed a computing machine during the 1800s, but was never able to fabricate a working model. A prototype of his design was finally constructed in England 153 years after it was designed. Built precisely to Babbage’s original specs, Difference Engine No. 2, consists of 8,000 parts, totaling a staggering five tons, stretching across 11 feet.

Now we have cars about that size, weighing much less, with computers inside the dash.

So now Ford is part of the annals of the Digital Revolution along with names like Microsoft, IBM, Cray, Apple and Google. Curators added the SYNC in-car communications system to the museum’s permanent collection just this week.

“We are honored. SYNC has helped us move faster than what is usually assumed of an automaker, providing a new level of openness and access that has forever changed how we look at our business and respond to our customers,” said Paul Mascarenas, chief technical officer and vice president, Ford Research and Innovation. “Ultimately, SYNC embodies what Ford is all about: going further to transform innovative ideas into products that are affordable, attainable and valuable to millions of people.”

The fact the Ford/Microsoft collaboration is being added to this historical cavalcade is a true indicator of the impetus to progress that’s driving the Digital Revolution. This was what Ford realized as they began to envision the software interface – people were upgrading or switching phones every two years to keep up with the latest advancements. If computer systems were too embedded in cars, they would become obsolete long before their useful lifespans ended, so vehicles needed to shake hands and party down with the digital devices owners brought into them. Consequently Ford looked to the Windows Embedded Automotive platform.

“As cars have transformed into mobile platforms for consumers’ communication and entertainment needs, the intersection of automotive and computing developments is becoming an increasingly important area for the museum to consider,” stated Alex Bochannek, curator and senior manager of the Computer History Museum.

“Ford Motor Company’s collaboration with Microsoft on SYNC technology is an example of this changing landscape. The Computer History Museum is pleased to add a first-generation Ford SYNC module to its permanent collection in support of our continued efforts to document the effects of computing on society at large.”

The Ford SYNC connectivity suite was first made available on the 2008 Ford Focus, their least expensive offering at the time, as an optional feature costing $395. Now there are over 4 million vehicles on the road using SYNC.

“When we first teamed up with Ford nearly a decade ago, we knew we wanted to develop a system that connected consumers’ digital lifestyles to the vehicle they love today, and seamlessly for years to come – regardless of the device,” said Kevin Dallas, general manager, Windows Embedded at Microsoft. “Having SYNC inducted into the Computer History Museum’s collection is a testament to the system’s groundbreaking innovation and to all of the hard work of our engineers, both in Dearborn and Redmond, to deliver a product that continues to meet consumers’ evolving needs and exceed their expectations.”

Since its introduction just four years ago SYNC has evolved rapidly – as intended – to now include:
• 911 Assist – an emergency calling feature utilizing the driver’s Bluetooth-paired phone to summon help if an airbag has deployed – was added during 2008.

• In 2010, Send to SYNC was introduced allowing owners to send a destination address from MapQuest or Google Maps to their car for easy turn-by-turn directions.

• The same year a Destinations App was built on Ford’s cloud-based service network allowing owners to find and input destinations or even check traffic while still in the mall or restaurant – not in the car.

• AppLink, also added during 2010, made Ford the first to voice-activate and control smartphone apps like Pandora and Stitcher, working with developers in their own programming languages with the SYNC application programming interface. SYNC now works with 10 smartphone apps across all three major mobile platforms: iOS, Android and BlackBerry OS.

You can get a glimpse into the origins of the now hallowed software interface by watching the video below.