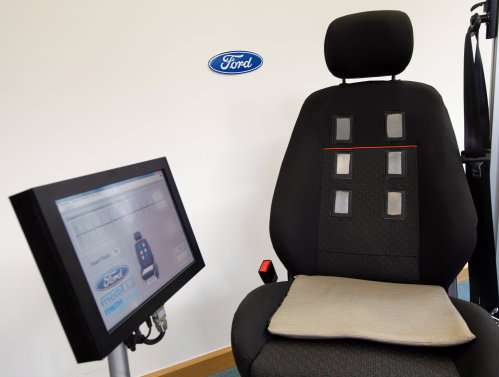 NASA has always monitored the biological functions of their astronauts and now Ford has developed a car seat that will monitor the driver’s heartbeat, allowing those with medical problems to manage their condition on the go. The seat opens the door to a wide array of health, convenience and perhaps life-saving potential.
Advertisement

"Although currently still a research project, the heart rate monitor technology developed by Ford and RWTH Aachen University could prove to be a hugely important breakthrough for Ford drivers, and not just in terms of the ability to monitor the hearts of those known to be at risk," said Dr. Achim Lindner, FERIC medical officer. "As always in medicine, the earlier a condition is detected the easier it is to treat and this technology even has the potential to be instrumental in diagnosing conditions drivers were previously unaware they had."

Data from the sensors could be analyzed by medics or onboard software, creating the potential to link up with remote medical services and safety systems, providing real-time alerts of imminent cardiovascular events like heart attacks.

The seat sensors under development would initially benefit drivers with heart conditions most – primarily the globally growing population of more mature age groups.

According to the U.S. Census Bureau, Americans 65 and older are projected to more than double in number by 2050, reaching some 88.5 million. Predictions in Europe suggest growth of these subsets as well, with the over-65 population reaching nearly 23 percent by 2025 and 30 percent by 2050.

"With increasing life expectancy meaning higher numbers of people and therefore drivers at risk of heart diseases, the ability to monitor hearts at the wheel could offer massive benefits in terms of health and road safety, both for the user and the wider public," said RWTH Aachen University Professor Steffen Leonhardt, who originally proposed taking the university's work with contactless infant heart monitoring to Ford. "The car is an obvious choice; it's a place where occupants spend long periods sitting in a rather calm position and a place that's increasingly less physically demanding, making it the ideal environment to measure heart activity."

Working with RWTH Aachen University, Ford developed the system positioned on the seat’s backrest. The unobtrusive electrodes were designed to detect the electronic signature of the heart through clothing.

"The sensors use a very specially designed system and carefully researched materials to be able to give a good signal without contact on the skin," Lindner said. "We are still fine-tuning their operation to work with some materials; certain types of synthetic fabric and lamb's wool can cause electrical interference that upsets the signal, but we can achieve a strong signal through 10 layers of cotton."

In stationary testing, 90 to 95 percent proved to be compatible and on-road testing of the heart rate monitors proved it possible to achieve highly accurate readings 98 percent of the time, even at this early stage of development.