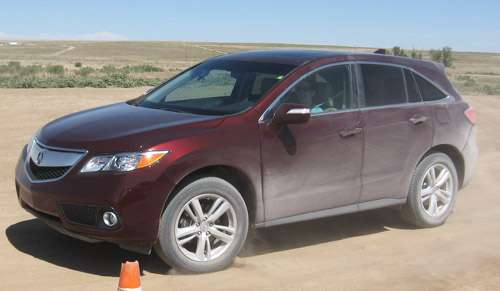 As the Third Annual Rocky Mountain Driving Experience neared its conclusion, Acura, Honda, Kia, Mitsubishi and Nissan had their vehicles at the Core Off Road Extreme to demonstrate their ability to negotiate unpaved, ungraded roads with plenty of twists, turns, bumps and unlevel surfaces on the 2-mile rally track.
Advertisement

Rather than rate them by an arbitrary and subjective evaluation, we will simply address these vehicles in alphabetical order pointing out how they performed as TN contributor Denis Flierl and I took turns driving and riding shotgun in all five vehicles.

The 2013 Acura RDX did provide the highest level of comfort and power of the five cars in the rally group. It took the twists, turns and bumps at a high rate of speed, smoothing them out and flying over them with the least impact to driver and passenger out of the bunch.

Of course, at a base price of $32,320 and being the only luxury brand in the group, that was something to be expected. It is powered by a 273-hp, 3.5-liter, i-VTEC V-6 engine, rated 27-mpg on the highway for the all-wheel-drive variant. In braking for tight curves on sandy surfaces, the ABS would kick in even when the pedal was briefly depressed.

Is this a sign the Acura technology works overtime to insure the safety of the occupants? It could well be – in the many cars driven on this course during the three events since RMDE was founded in 2010, it is the only time we’ve noted ABS intervening at all.

The Honda CR-V may have been the least suited to this kind of trial, but we admire the brand’s bravery in providing the model at this venue. The CR-V has just set a sales record for the month of May – over 5,000 units beyond any preceding May total.

The mid-size crossover didn’t perform badly on the rally course and, in fact, the 185 horsepower of the 2.4-liter, 16-Valve SOHC i-VTEC aluminum alloy 4-cylinder engine did a good job of negotiating the ups and downs of the course. The only way it didn’t seem to fit for this exercise was spongy suspension that caused a noticeable up/down motion after significant bumps or dips.

On the other hand, with a base price of $25,845 for the EX AWD trim level, this may have been the lowest priced rally car at this year’s RMDE offroad tryouts. If it handles offroad impediments this well, the pot-holed and sun-warped streets of the average city should give it no trouble at all.

The Kia Sportage, which also performed well last year, was second only to the Acura in its navigation of the course and comfort level, though fairly equivalent to the Mitsubishi Outlander GT.

It is powered by the 176 horsepower 4-cylinder DOHC with CVVT aluminum engine and a DynaMax electronically controlled 6-speed automatic transmission. It handled the route’s curves, hills and valleys very well, thanks to gas-powered shocks all around, enhancing MacPherson struts in front and multi-link suspension in the rear.

It has a starting price of $18,500 but based on the options contained in the model driven, it is probably in the $25 to $30K range in the upper trim and AWD models.

The Mitsubishi Outlander GT performed very similarly on the rally course but had its own outstanding characteristics. It has a 168 horsepower 2.4-liter MIVEC 4-cylinder engine that gets 28-mpg highway. Optionally you can choose a 230 hp MIVEC 6-cylinder that still claims 26-mpg highway.

This is partly a result of Mitsubishi’s Idle Neutral Logic that shifts the car into neutral whenever you are at a standstill. Not a stop/start system, but one that insures the lowest throttle level whenever drive is not in demand.

The main differences in the Mitsubishi and Kia make it a matter of taste – like Coke versus Pepsi. In short the Outlander seems a bit roomier and does have three rows of seats to accommodate 7 occupants while the Kia has a 5-person limit.

The Mitsubishi has 72.6 cubic feet of cargo space with the back seats down while the Kia has only 54.6 with its seats down. There are other considerations like price, features and mileage, but we lay it out this way: If you live in the mountains and get into the city now and then, the Kia’s the ride for you. If you live in the city and go to the mountains now and then, choose the Mitsubishi.

Similarly, if you have a small family with a medium amount of gear, the Sportage is the better choice. If you have a bit larger family or one with a bit more gear, go with the Outlander.

Our only other ride and drive during the rally runs, was the 2012 Nissan Juke. Last year this was our favorite out of the rally cars present, despite the presence of many bigger, more powerful vehicles that were quite nice in their own right. This year it didn’t rate so high, but perhaps it was because it wasn’t as new and exciting as it was last year.

Nevertheless, when the made-over 2013 Nissan Juke comes out, we think it will be just as new and exciting as it was then. It is the vehicle for the urban denizen who wants a fun to drive, yet economical ride – versatile and capable of occasional jaunts off the pavement, while easy to find in the parking lot because it doesn’t look like every Asian sedan for acres without end.

The Third Annual Rocky Mountain Driving Experience is now in the history books. Our thanks to the folks at Automotive Media Solutions and Specialty Transport Incorporated/Denver for their assistance in making this fun and informative event successful as well as safe.

Aaron Turpen wrote on June 18, 2012 - 2:12am Permalink
FYI, I have scrib sheets for all vehicles at the CORE event. The Kia at its top level (as we drove it) was $32,515 and the Outlander, also at top trim, was $33,605; destination included on both. The Kia is rated at 21/26mpg and the Oultander at 19/25mpg. The Kia received 4 or 5 stars for all safety ratings while the Outlander only received one 5-star, the rest 4s and one 3 (passenger crash). For the record, the Juke was my favorite on the rally track. Mostly because it was the lightest in the lineup and therefore easily caught air. Every SUV there was fun, though, and it was great to do a rally drive in other people's vehicles. :)