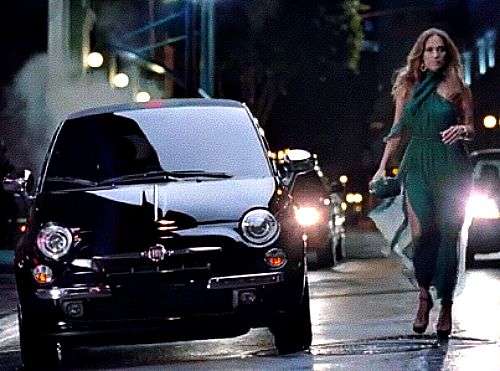 Jennifer Lopez performed her hit "Papi," featuring the 2012 Fiat 500, at the 2011 American Music Awards (AMAs) held at the NOKIA Theatre L.A. on Nov. 20. Meanwhile, since the introduction of the stylish little Italian car last March, only 15,826 Fiat 500s have sold through October - well short of the projected first year sales of 50,000.
Advertisement

Last September, FIAT announced the collaboration with Lopez, including placement of the 2012 Fiat 500 Cabrio in Lopez's music video, Papi, as well as a 30-second trailer of the video, featuring the vehicle. Lopez also appears in two more advertisements for the brand titled My World and Elegance, which features the Fiat 500 Cabrio and the Fiat 500 by Gucci.

"The FIAT Brand is honored to share the stage with Jennifer Lopez at the 2011 American Music Awards, her drive and determination is the common thread that is shared with the brand and our philosophy that 'Life is Best When Driven,'" said Olivier Francois, CEO of the FIAT Brand. "This appearance allows us to continue to expose the 2012 Fiat 500 to a wide demographic. These past few days have been momentous for FIAT as we have recently revealed the all-new 2012 Fiat 500 Abarth at the 2011 Los Angeles Auto Show."

Though Fiat may be honored by the award their gorgeous partner won, dealers aren’t seeing the star’s cachet come through the showroom door. According to a recent report by Zach Bowman on AutoBlog, 29 of 130 Fiat dealers did not move a single 500 during October.

The net effect of that performance is the reassignment of 65 workers at the Dundee, Michigan plant where the Fiat 500 engines are assembled. At current sales rates, there are already enough 500s around to last a half-year.

Sergio Marchionne, Chrysler's CEO, has reportedly credited the problem to the distribution network, while the dealers think American buyers simply aren't interested in such small vehicles.

So no one knows if the Jennifer Lopez-focused national advertising campaign plus the arrival of the 500 Abarth and the Gucci models will result in any increase in sales.

Jennifer Lopez sells lots of records and her films usually do well, but so far she’s not moving too many folks to plunk down their money on the Fiat 500.

Both commercials can be viewed at the FIAT brand Facebook page and on the FIAT YouTube channel.