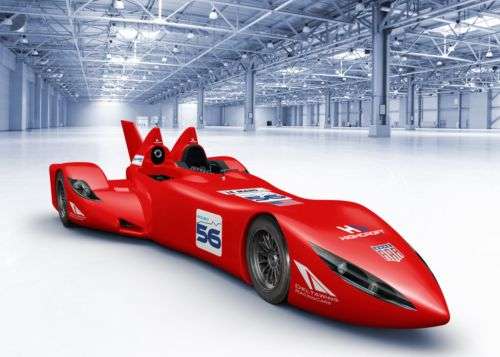 Experimental American DeltaWing to compete in 24 Hours of Le Mans

Some of the biggest names in American motorsports will join forces for the 2012 24 Hours of Le Mans to demonstrate an experimental race car’s allegedly extreme performance utilizing half the weight and horsepower of a traditional racecar. The DeltaWing looks more like something you’d find on the Bonneville Salt Flats rather than the famous French endurance race.
Advertisement

Culminating of the efforts of a team of racing legends, the DeltaWing is the entry of a group known as The Project 56. It combines the design acumen of DeltaWing Racing Cars, LLC, the fabrication abilities of All American Racers with the winning record Highcroft Racing.

All-American Racers is owned by American racing legend Dan Gurney, who won the 1967 Le Mans race among many others. Highcroft Racing has won back-to-back championshiops in the American Le Mans Series.The founder of the American Le Mans, Dr. Don Panoz, also joined the team as a key advisor.

The group received an invitation today from the Le Mans 24 Hour race organizers, the Automobile Club de l'Ouest, to enter the 2012 race as an additional 56th entry.The 56th position on the grid is reserved for a technologically innovative car to compete "outside the classifications" – one highlighting new applications and technologies previously unseen in the world's greatest endurance race.

The DeltaWing’s anomalous design, aerodynamic departure and corresponding weight and power make it a perfect fit for the 56th slot. The 56th place on the grid is reserved for a technologically innovative car to participate "outside the classifications" – a vehicle showcasing new applications and unique technologies previously unseen in the world's greatest endurance race.

"The secret to the DeltaWing car is simplicity and efficiency," designer Ben Bowlby said. "We really have to applaud the ACO for having the foresight to create this opportunity for an entry like ours. We believe this is a true automotive innovation which could be the catalyst for changing the way people look at not only racing car design, but automotive design as a whole."

The experimental car targets competitive performance with half the horsepower of the main contenders by splitting the aerodynamic drag of typical racecars along with a collateral reduction in weight.

The Project 56 Group is working with their engine partners to install a 1.6-liter turbocharged power plant producing approximately 300 horsepower. Downforce for the DeltaWing is generated solely by the contours of the unique car’s underbody.

The 24 Hours of Le Mans is the world's oldest and most famous endurance race. First held in 1923, the event has always attracted the world's finest automotive manufacturers and drivers.

"The DeltaWing project really represents a unique opportunity for all automotive industry sectors," said Duncan Dayton of Highcroft Racing. "It is so new and exciting and such an interesting departure from the traditional race car development path – it is highly relevant to the future. Given that the world is concentrating on efficiency and green technologies in an attempt to achieve sustainability, this project in my opinion will help promote the direction that is being adopted throughout the entire automotive industry."