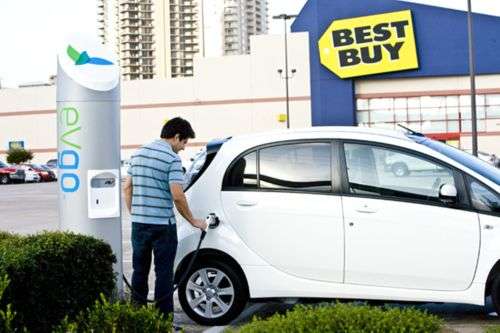 On the heels of the Earth Day announcement that the electric Mitsubishi i is now available for advance ordering, the manufacturer announced a partnership with NRG Energy to pave the road those cars will cruise with EV charging stations in Texas. As one of America's leading energy producers, NRG will help provide owners of the Mitsubishi i new freedom and range confidence across NRG's eVgo (ee-vee-go) privately funded electric vehicle (EV) recharging network.
Advertisement

The Mitsubishi i is set for release over the coming months in two of America's most populated metro areas - Houston and Dallas/Fort Worth. The line will later expand into other major cities in Texas, so Mitsubishi i owners in the Lone Star State will be able to quickly and conveniently recharge their EVs at dozens of eVgo charging Freedom Stations.

The charging stations will provide a 480-volt DC fast charger extending range as much as 30 miles in 10 minutes plus a 240-volt Level 2 charger that gives you another 25 miles in an hour.

Freedom Stations are accessible around the clock with a customer service tower and camera, allowing access to an eVgo service representative and alarm function that activates a strobe light, siren and alerts law enforcement, even while inside the vehicle. The eVgo network will also include hosted units that offer a 240-volt Level 2 charger during the retailer’s business hours.

"Through this partnership, owners of Mitsubishi i electric vehicles will find tremendous convenience, economy and price security through their access to the eVgo network," said Arun Banskota, president of NRG EV Services. "We welcome Mitsubishi to the eVgo partnership and look forward to building an unprecedented and growing EV infrastructure together."

According to plans, Houston will have 25 of these new eVgo charging stations, while the Dallas/Fort Worth area will get 35, all by the end of this summer. By year’s end the cities should have 50 and 75 stations respectively. NRG also plans to electrify the Interstate 45 corridor connecting the two cities during 2012.

Mitsubishi will act as a consultant to NRG in efforts to advance the EV infrastructure in America. The Japanese auto manufacturer has expertise in EV infrastructure from 40 years of building and selling electric cars in Japan and Europe.

"We are very excited to be working with such a dynamic and forward-thinking energy company as NRG to expand the electric vehicle recharging infrastructure in the great state of Texas," said Yoichi Yokozawa, President and CEO of Mitsubishi Motors North America. "Savvy consumers and corporate/municipality fleet managers who take advantage of our special pre-order offer for the eco-friendly and money-saving electric-powered Mitsubishi i beginning Earth Day, April 22, 2011, will have scores of convenient, fast and affordable eVgo recharging stations to choose from when they take delivery of their cars next year."

Another part of the agreement will allow Mitsubishi i owners in Texas to subscribe to special rates offered by NRG during the home assessment service and installation of an Eaton Level II home charger.

For more information on the Mitsubishi i click here.