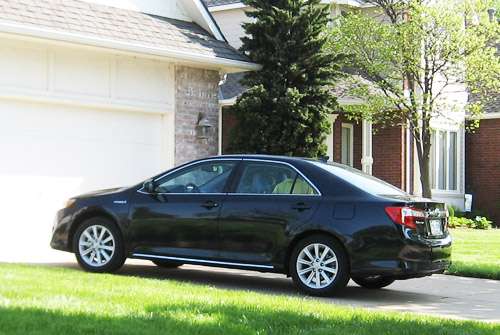 Sometimes driving is more about the passengers as was the case when I drove the 2012 Toyota Camry Hybrid XLE to Wichita last week to visit Ms. Eva, a respectfully submitted pseudonym for my dear mother’s true name.
Advertisement

On the trip there the 2012 Toyota Camry Hybrid XLE had to fight crosswinds of 75 mph across the high plains. Traveling at a mileage-reducing 75 mph ambient highway speed against the winds lowered the efficiency of the intrepid hybrid to a mere 32.9-mpg, according to the onboard computer.

We stopped in Hays KS to refill with over a quarter tank still remaining. Given about 40 miles around Denver before departure, that makes our actual mileage 440 divided by 10.9 much closer to 40-mpg, despite the wind and highway velocity.

It’s around this area where Kansas has acres of wind power generators and I was surprised the first ones encountered were virtually motionless in these high winds. Then I recalled they were on the wrong side of the highway – a new generation field not yet online. These power-producing windmills seem to take on a new significance these days. Some people find them unaesthetic, but I see a graceful beauty in their harnessing of natural forces to produce cleaner energy, while still allowing agriculture to continue about their bases.

Ms. Eva did not understand this hybrid technology. She was used to the cars I drive taking much more frequent fill-ups, but I had to put off gassing up again until we had driven all about for four more days – there was three-quarters of a tank remaining after filling up in Hays.

Ms. Eva had no real complaints about the 2012 Toyota Camry Hybrid XLE itself, but did have a problem with the navigator. Specifically she doesn’t like some other woman telling me what to do in her presence – she considers this her exclusive prerogative.

She didn’t seem to care much for it’s constantly interrupting her – from reminding me of all the mistakes I’ve made in what she sees as an unsuccessful and fruitless life. From what friends have told me, this is what most moms consider their life’s work – telling their children what’s wrong with them, that is.
That very navigation unit made it much easier to find my way through the morass of new freeways, interchanges and bypasses that have been built over the past few years. Life is change and highways and communities are living entities in that sense.

Ms. Eva liked having a handle over the door, she could hold onto it when merging onto the highway or negotiating wide elongated turns.

Remarkably she never once complained about my music, a remarkable difference thanks to the fact my phone was easily synched allowing me to select less obtrusive selections from my playlists.

Further, she was never once too cold or too hot, even in remarkably varying spring weather temperatures. Automatic climate control is a wonderful thing.
Thanks to the electric power steering we managed to accomplish numerous shopping circuits, a trip to visit one of her friends in a Rose Hill Nursing Home and another to replace the flowers on my father’s grave at the cemetery south of town, all without scaring the living daylights out of her – a significant accomplishment in itself. The Eco-Mode is also a great boon when driving Ms. Eva, tending to turn a lead foot into one made of aluminum alloy.

In the process we managed to confuse and annoy the folks in the local Lowe’s flooring department to no end. We also got to harass the folks at Dillon’s (Kroger’s, King Soopers or City Market elsewhere) when the pump wouldn’t read her rewards card and cost her $1.10 – that she may or may not had coming. We got it anyway. That’s Ms. Eva.

All in all, the 2012 Toyota Camry Hybrid XLE is my favorite car for driving Ms. Eva to date. It made the whole affair safer, more comfortable and most importantly, less stressful than any visit since my father passed away several years ago.

Figure up the cost per mile for driving your car and maybe the hybrid equation will start to make sense. The 2012 Toyota Camry XLE is loaded with navigation, rearview camera, heated seats, satellite radio, Bluetooth connectivity, hands free communication, power sunroof and more for $34,547 delivered.

With the new 2-year maintenance program the 2012 Toyota Camry XLE is a lot of car for the money and pays you back daily as you drive it. Check one out and see if it works for you and your passengers as well as it did for driving Ms. Eva.