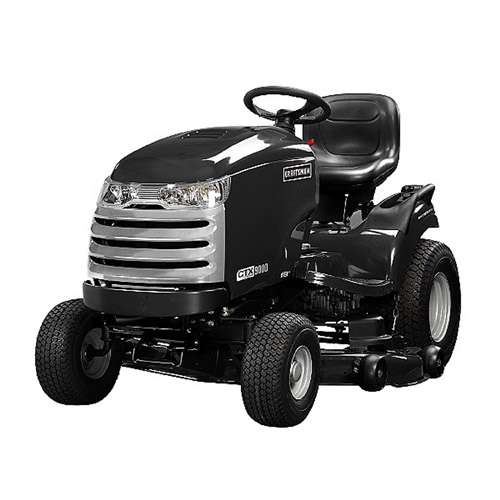 They’re not what you usually expect to see at the premiere auto show in America – vehicles with a top speed of 8-mph. It seems Craftsman is betting those who like to cruise the streets in a luxury automobile, will want the same comforts when they’re mowing their lawn, so they are bringing the new line of CTX tractors and mowers to the North American International Auto Show (NAIAS) next month.
Advertisement

Though certainly not rated for the freeway, these vehicles come with power steering built-in cup holders and other upscale amenities, the Sears Holdings Corp's Craftsman division will debut a new line of premium riding lawn mowers at the Detroit auto show, reports John D. Stoll of Reuters.

Craftsman is betting the new line of riding mowers and lawn tractors will appeal to a new generation of American consumers and believe the interest in automobiles will overlap with these symbols of suburban status.

"A lot of people, when they think about mowing, they think about using the tractor as a chore," Craftsman General Manager Kris Malkoski said in an interview on Thursday. "This is a premium tractor -- more of a luxury."

Costing nearly double the price of more economical models, Craftsman's new CTX lineup ranges from $3,000 to $6,500. Presumably financing is available though no mention is make of trade-ins.

The company is using the Auto Show reveal in an effort to raise their standing compared to rivals like Deere & Co , Cub Cadet and Toro Co . Craftsman generates $2.5 billion in revenue per year from their portfolio of power products, from small tools like drills to heavy-duty garage door openers.

The company will have the opportunity to gain the attention of the roughly 750,000 people who attend the show annually, including media professionals from dozens of countries. Auto shows have been used to reveal the new models of vehicles and futuristic automotive concepts for generations.

Occasionally, exhibitors stray from strictly automotive product promotion. For example, Ford picked an auto show to unveil electric bicycles and Honda Motor Co showed of its technological expertise with its ASIMO humanoid robot at another.

Not everyone is thrilled about Craftsman coming to the show. Bob Lutz, who is coming with the new Via line of long range electric pickups, SUVs and vans, reportedly had the following comments regarding the mower/tractors.

"It's an automobile show, stupid, not motorcycles or garden implements," Lutz raged. "What's next? Plumbing and bathroom fixtures? A Toto-toilet stand? An Art Van furniture stand?"

Craftsman will not be on the show floor, but rather in a concourse with other non-automotive vendors – the History Channel and Hot Wheels, for example, according to Joe Rohatynski, a spokesman for the auto show. The marketing partnership with Craftsman is not intended in any way to rival the 40-plus vehicles planning launches at the show.

Craftsman's Malkoski seems to think the product is so revolutionary, it belongs in a place you expect to see cutting edge engineering. That 8-mph top speed is industry leading.

The push of a button adjusts the height of the blade and collateral parts easily change the mower to a hauler, aerator, sweeper or snowplow. The line will goes on sale in February at Sears stores in the U.S.

"We were so excited about the launch of this line that we said 'how can we take this tractor to the level that great cars are on?' Malkoski said.

The CTX line will be fabricated by the Briggs & Stratton Co. at sites in New York and Georgia.

Toyota's First EV Will Have a Name of BZ: Toyota BZ
First Videos From Inside The Boring Company's Las Vegas Loop
END_OF_DOCUMENT_TOKEN_TO_BE_REPLACED