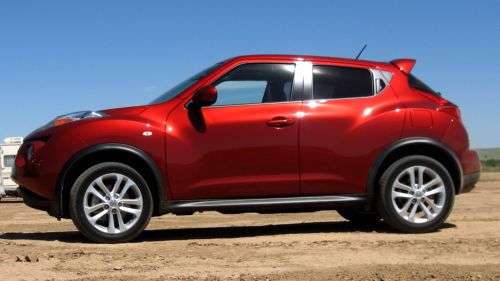 The 2011 Nissan Juke SL is the most expensive subcompact on the market, but just might have you jumping for joy with this jazzy, jaunty, fully loaded, fun little runabout.
Advertisement

There is a reason the 2011 Nissan Juke SL is the most costly of the commuter cars, a category it frankly defies. First it doesn’t look like a commuter car – in Cayenne Red in reminds of the Razorback emblem of the University of Arkansas – stout, randy and ready to bolt.

Then there are the performance values of the short, incredibly easy-to-park 2011 Nissan Juke. It is agile beyond words thanks to its short 99.6-inch wheelbase, independent front and multi-link rear suspension with stabilizers at both ends.

The all-wheel-drive makes it ready and willing to take on unpaved forest service or residential mountain roads, but it is a bit sensitive to washboard conditions on such roads. With a curb-weight of only 3210, the 2011 Nissan Juke tends to lose its grip on undulating roadbeds and it’s not easy to find that sweet speed at which you can glide over the bumps without starting to drift. Of course, as long as it’s more or less under control, that’s part of the fun of driving this radical-looking little ride.

The 2011 Nissan Juke SL gets its juice from a 1.6-liter, turbocharged direct injection four-cylinder gasoline engine developing 188 horsepower and 177 lb.-ft. of torque. This is coupled to a CVT rather than gears, which makes it a little slow off the line. It does come with a Sport setting, however, allowing you to manually select gears. In either case, once this little compact gets up and running the turbo kicks in and it’s ready to go.

We are not implying it is over-powered, as if it were, it simply would not be able to deliver the respectable mileage of 25 city and 30-mpg highway it boasts.

Just because it’s a small car doesn't mean it's not safe. The 2011 Nissan Juke SL comes with a full cadre of airbags and electronic braking systems, plus crumple zones front and rear around a reinforced passenger compartment.

It can comfortably seat four adults of normal size and probably seems roomy to a foursome of the young adults the car is obviously intended to please. Like Jumpin’ Jack Flash, it’s a gas to drive and with a full compliment of friends aboard, there’s still 26.5 cubic feet of cargo space behind the rear seats.

With all-wheel-drive it should perform well in inclement weather and with the right tires will probably handle snow and ice fairly well.

This year's Nissan Juke SL AWD tested had only two added options, namely floor mats and a rear spoiler, costing $560. Still the final price with destination charges was only $25,860.

We would recommend a test drive to the young buyer who can balance the desire for a cool, good-looking, reliable commuter with the need to manage the costs of operation, both at the pump and the insurance bureau. Take a ride and see if the 2011 Nissan Juke doesn’t have you jumping for joy.