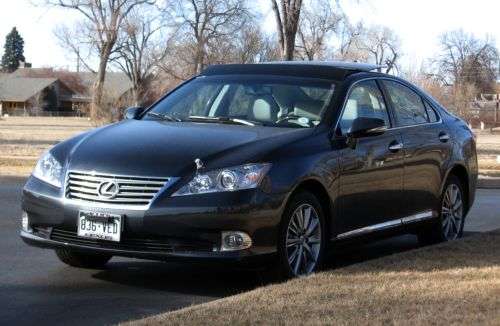 Simply put, the 2011 Lexus ES 350 is one of the most satisfying sports sedans this writer has had the privilege of driving. It is an endearing cocktail mixing a luxuriously appointed interior, state of the art technology, gratifying handling and exhilarating performance into a deeply satisfying vehicular libation.
Advertisement

Of course, there are those who will challenge this assertion – feeling only a rear-wheel drive vehicle can be a true sports sedan. From a point of view that may be growing long in the tooth, it is a valid assertion for some.

In Colorado, however, we learned generations ago front-wheel drive is second only to all wheel drive. Rear wheel drive, here, will eventually lead you to chilly immobility due to Colorado’s gloriously unpredictable climate. When you leave home from Denver, for any length of time, it is wise to carry clothes for three different seasons – you just never know.

Even with their high tech sensors and fancy computer models, weather professionals can’t always predict what will happen over 8 to 12 hours in the high country.

Rear wheel drive in a surprise Colorado blizzard will have you praying for a signal on your cell phone. Get off the road if you can, cause in a whiteout the drivers behind you can’t see you in time to stop before impact.

That’s not easy when the road blends into everything else under a layer of fresh snow.

Occasionally, when reviewing a vehicle, the spec sheets remain unexamined until a few miles are put on the car. This is to avoid prejudging the vehicle on its specs instead of on its driving experience, user friendliness and performance. Such was the case with the 2011 Lexus ES 350.

The initial test drive was into Colorado’s South Park, along a long stretch of mountain blacktop, over Crow Hill and Kenosha pass. The ES 350's performance on the highway was in a word refreshing.
Negotiating mountain highways is a varied pace process, as slow moving trucks form tails of underpowered cars – those averse to coaxing enough acceleration out of a 1.6-liter engine to get around a truck in the short and limited sight passing lanes common on curvy roads.

The Lexus cruise control functioned well in this kind of speed up and slow down driving and easily passed everything in those short passing zones. All without even pushing the 3.5-liter, four cam, V6 engine near the limits of its 283 raring stallions.

Actually, the sedan performed so well on these maneuvers, handling mountain curves as though glued to the road and simply ignoring any moisture on the road, the fact it’s a front-wheel-drive vehicle came as a surprise. It has the steady tracking and cornering of an all wheel drive car.

The engine is all aluminum and uses dual VVT-I. The smooth ride results from a six-speed automatic transmission equipped with sequential shift for enthusiasts, all wheel independent strut suspension, gas powered shocks and stabilizers, fore and aft.

The interior, leather seats, gauges, controls and endless features make long drives about as tiring as walking to the corner. If you were sentenced to live in your car, this would be the country club of vehicular incarceration in many ways.

It has all the technology, safety and creature comforts you’d expect in a luxury sports sedan at a base price of $35,525 and totals only $44,637 fully loaded and delivered.

Most impressive was the mileage attained in a wide mix of mountain, side street and urban highway driving – 24.3 mpg. Power and economy are a combination not easy to find .

Bottom line we love this car. Beyond what’s been written, there was just a certain je ne sais quoi about the 2011 Lexus ES 350. We recommend not buying anything without test-driving a Lexus.

If you don’t like it better, we’ll respect that – but at least you will have made a truly informed decision.

Tesla Contemplates A New Strategy for China Retail even As Sales Boom
Jay Leno on Elon Musk & EVs: “I Think He Should Get ... Credit"
END_OF_DOCUMENT_TOKEN_TO_BE_REPLACED