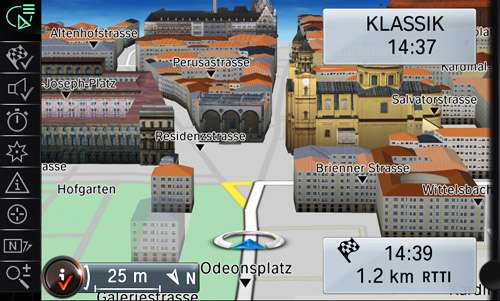 Of course, that’s in addition to more music storage, extended radio features and high speed Internet, among other aspects.
Advertisement

In part one, we brought you up to date on the new navigation features, including High Guiding, 3D Cities, (a detail of the display is at right) the interactive map and advanced real time traffic data, plus dual phone simultaneous synching.

Multimedia
Now a 20 GB hard drive allows for onboard music storage, while the track search function has been upgraded to provide faster song retrieval than ever before. An extended toolbar is employed to speed access to additional sub-menus, along with even greater simplicity and ease of operation.

New playback functions allow the driver to hear more songs like what’s currently playing by activating the More like this function to generate a new playlist of similar tracks from the onboard collection. An Add to favorites feature is a star icon displayed during playback facilitating the collection of your best-loved tunes into another playlists.

Radio+: displaying what’s on
For the first time, FM radio is accompanied by central information display graphics, just like digital radio. When FM radio stations broadcast the data (via radio text or radio text+), the artist, album and genre cover will be displayed just as when listening to HD radio or using an external device. And even if no data is transmitted by the station, a generic genre cover and the station name will be displayed for a neat, high-quality effect.

BMW iDrive Touch Controller
BMW’s iDrive Touch will bring a touch-pad into the system’s central control functions for the very first time. At two inches across, the multi-purpose sensor makes some controls, such as the map functions, more intuitive, faster and easier to use.

Handwriting recognition
The handwriting recognition function enables alphabetic characters to be entered with a fingertip by delineating them on the surface of the touchpad. Normally, navigators use touchscreens or a wheel selection device to spell out streets and cities in destinations. Now you can quickly switch from menu selection to data input using the touchpad. You sketch an E on the touchpad and the navigator will call out that letter to confirm. Before you know it, you’ve input Elm St. as simply as finger painting.

Map navigation
The new touchpad also makes navigating freely within the route map a snap using the two-finger pinch gesture used on smartphones and digital notepads. For example, traffic jams can easily be expanded to display the gridlock and suggested alternative route. Points of interest on the map can be activated by the touchpad and with a click of the control knob bring up a display of more detailed information.

LTE Car Hotspot brings ultra-high-speed Internet onboard
The BMW LTE Car Hotspot provides the next generation in mobile Internet. The BMW Car Hotspot just needs an LTE-capable SIM card inserted into the hotspot. Once in service, the adapter is like any other hotspot, allowing LTE high-speed Internet access on any devices in the car. The hotspot can also be used use for up to 30 minutes outside the vehicle thanks to a built-in battery pack and antennae. In addition, a standard USB power supply unit enables autonomous use without the need for vehicle or battery.

Devices connect via WiFi to the BMW LTE Car Hotspot and its Long Term Evolution technology to get online and multiple devices can be linked at the same time. Meanwhile, the hotspot improves reception via galvanic connection to the antenna .

The unit will fit into any BMW center console given a phone base plate, and can be retrofitted without altering the antenna or much installation work. Even older BMW vehicles can be easily equipped with the latest in mobile Internet technology with this accessory.

LTE – high-speed Internet
Long Term Evolution (LTE) puts an end to annoyances like music streaming plagued by pauses and jerky video playback. LTE uses exceptionally broad bandwidth along with very low latency translating into ten times the data transmission speed. With up to 150 Mbit/second and latency of a few hundredths of a second, LTE paves the way for a mobile Internet experience matching or exceeding that of a home PC with a dedicated broadband line.

Coming soon: integrated LTE for the SIM card
This also benefits mobile services already offered under BMW ConnectedDrive, making them faster, more effective and even more widely available. Cloud-based services like in-car video and music streaming, will be even more enjoyable and easier to use thanks to LTE.

Taking Dictation – writing by speaking
The next generation of BMW ConnectedDrive employs a full speech recognition system to transcribe a driver’s words. Dictated text can subsequently be sent by text, instant messaging or email. There is also a voice memo function for making personal notes up to two minutes long, which can be emailed or archived. At the same time the new smarter voice recognition makes the BMW Navigation system simpler, easier and quicker to use, but also safer than ever before.

People are communicating increasingly by email or SMS, both privately and for business. The BMW Mobile Office functions already made it possible to have messages from a Bluetooth-connected mobile device displayed in the vehicle and vocalized. With the arrival of an automotive world first in the form of the dictation function, this feature is now complemented by a full speech recognition system. For the first time, this gives drivers the ability to dictate text freely and compose short text-based messages simply by saying what they wish to write.

The system works with no need for drivers to take their hands off the steering wheel and is even multilingual – able to recognize and read text in six languages at present. Just as with similar desktop applications, punctuation marks and instructions such as “new line” can be entered, allowing if desired, an end result grammatically correct and easy to read.

The speech recognition technology is by Nuance and known as Dragon Drive. A few seconds after dictation, the text appears in the display and can be read to confirm the message’s accuracy. Drivers have a number of editing tools to polish up emails and SMS messages.

In the US, the dictation function is incorporated within BMW Assist, and will be included as part of the available Convenience Plan, an optional upgrade. It includes several convenient features such as BMW Online, Concierge services and Critical Calling.

The concierge service can be activated by the SOS button or by selecting it in the navigation menus and offers help with restaurant/hotel accommodations, movie times/tickets, flight arrival/departure data and times, in addition to fuel pricing and availability. It can also research traffic conditions based on your current location.

Critical Calling allows up to four operator-assisted calls per year from car. Using the SOS button to speak with a BMW Assist response specialist, they can then connect the driver to their requested party for up to five minutes.

In car telematics keep delivering more and more and BMW is still lighting the way.