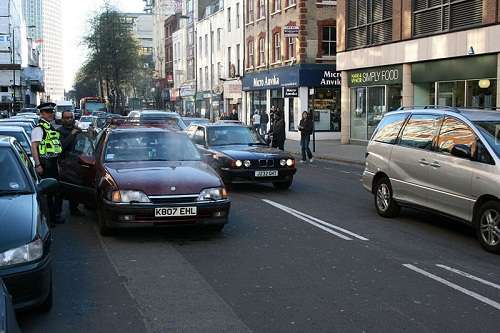 Automotive breakdowns could one day be a criminal offense

If poor maintenance leads to freeway breakdowns that continue to cost motorists hours of stress, missed appointments, delays and aggravation, it may one day become a criminal offense, leaving the poor, beleaguered offender to suffer the added consequence of jail time or fines on top of the unaffordable repairs their vehicle needs.
Advertisement

Such a movement is growing in Australia according to a post by Greg Thom on the Herald Sun just this morning.

According to INRIX, an independent provider of traffic and navigation information, many of us spend up to four weeks annually in traffic jams.

Of course, breakdowns resulting from a lack of timely maintenance are avoidable, aren’t they? Wouldn’t punishing the scoundrels essentially be a return to the feudal concept of debtor’s prison? Making poverty in to crime unto itself? Is the inability to manage one’s life and money a sinful choice or simply a failure of our system of education and commerce?

The National Motorists Association of Australia seems to think such merits prohibition and punishment. Part of the problem results from the reduction in government budgets, whether in the provinces of Australia or the states of America. Breakdowns require police man-hours most metropolitan areas can’t currently afford – not to mention the time and indefinite costs to those stuck in the resulting traffic jams. So like everything else, it really comes down to economics.

It would seem the haves are happy to tolerate the have-nots as long as they don’t interrupt their relatively idyllic lives. So why do some people wonder why there’s an Occupy Wall Street movement in the U.S?

Economics are why the various Departments of Transportation can’t keep up with the mobility needs of a rapidly growing populace, and that lack of building for the future, rather than playing catch-up, is the true source of gridlock.

We’ve all been stuck in traffic when we’re supposed to be somewhere important. Yes it is aggravating, but it’s part of the world we live in. Should we really regulate who can use the highways at rush hour by how worthy their cars may be?

Granted, there are some people on the highways who don’t belong there. They are the old blue-haired women and half-zeimer men who drive 45 mph and never have accidents, but cause them because hurried, frustrated people will take ridiculous risks to get around them.

There are the kids driving on the highway and texting, even though they know it is dangerous. Shouldn’t we be worrying about them instead of those who are just trying to get ahead and for whom feeding the kids takes precedence over a scheduled oil change or radiator flush and fill?

What it comes down to is how many of the delays are caused by breakdowns and how many by accidents. Modern police response to auto accidents has become over the top, as they apply the latest forensic evidence gathering to a situation where the cause and effect are clearly perceptible. In Denver, highways have been completely shut down up to four hours so they could play with their high-tech toys and let specialists fulfill their role. The problem to the rest of us is there were no questions to be answered for anyone but insurance companies.

We don’t know what’s going on in Australia, but here we suspect most highway delays are the result of accidents rather than automotive breakdowns. Does someone experiencing a flat tire qualify as a criminal? Does that depend on how old or worn their tires have become?

Life today is complex and hard enough without making crimes out of economic hardship or bad decisions. If it is so big a problem let’s just require cars on the freeway to pass a viability test. That way the breakdowns will happen on city streets where they obstruct traffic even more, but affect the lives of fewer people.

Cars were once required to pass safety inspections, but locally that was changed to emission tests many years ago. Keeping our air breathable is an awesome goal, but keeping the cars on our roads safe for their drivers and others is not an end that should be disregarded – on any street at all.

For example, should a Ford Pinto or a P.T. Cruiser ever merge onto the Autobahn? We think not. They simply can’t keep up with the ambient speeds.

In Australia on the highway in question, they estimate 31 percent of the traffic delays are the result of breakdowns, and though response time is only six minutes, some trucks can take 30 to 40 minutes to clear.

If a commercial company is the culprit and shows repeated offenses, then maybe a citation makes sense. Better to make them bring their trucks up to a reliable state. On the other hand, if you cause a trucking business to close, you add to the ranks of the unemployed. This is only the tip of the complexity of such issues.

Gridlock is an albatross on all of our backs, but let’s keep unreliable cars off the freeways before we return to the feudal oppression of Merry Old England.

John Goreham wrote on May 14, 2012 - 7:34am Permalink
This is terrible. How far from the mark can our government get? Breakdowns should not be punished with fines or criminal court action. Summary execution makes much more sense and would speed things up quite a bit! :)
David Prowse wrote on May 14, 2012 - 12:46pm Permalink
Might wish to check out California state laws concerning breakdowns on the highways. Troopers have front bumper guards designed to push breakdowns off the roadways.
Don Bain wrote on May 14, 2012 - 4:51pm Permalink
Now that'll teach 'em. You have to admit that's a fairly practical approach to the problem! The original source was complaining about commercial haulers breaking down. An eighteen -wheeler stalled in the left lane is a bit more of a problem.