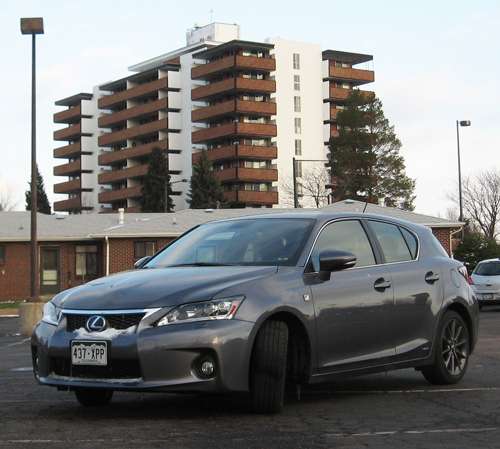 The 2013 CT 200h provides the optimal combination of style, efficiency, size, comfort and technology to empower the lifestyle of the up and coming urbanite, dedicated to finding the good life in a sustainable city community.
Advertisement

Still in its first generation, the CT 200h is a rare sight in the city, something its generally young owners don’t seem to mind.

Having a luxury hatchback that gets around 40-mpg, is easy to park, comes packed with technology and costs less than $40K projects economic acumen, urban sophistication and a respectable concern for the planet.

Besides, it just a pleasure to drive.

The Exterior
The 2013 CT 200h features sleek styling with a European slant, incorporating the Lexus spindle grille in a more demure, reserved fashion. The Premium trim level is the only one for which the F-Sport package is available, which adds mesh grilles above and below the front license plate, complimenting the integrated fog lamps.

Daytime running lights are included in the headlamp cluster, features LED self-leveling lights with lens washers. The CT 200h Premium, the only trim level with the F-Sport package available, takes a low stance on elegant 17-inch F-Sport alloy wheels, its sleek roofline running across the power moonroof and back to a top-mounted, enlarged, airflow-enabling rear spoiler. The car has a coefficient of drag of only 0.29.

The Nebular Gray Pearl finish sports an F-Sport badge on the fender, complimenting the black and metal color scheme on the inside.

The Interior
This is where the CT 200h premium really distinguishes itself from the plethora of Eurowagons on the market. Though not spacious by any means, a raked windshield makes it feel more open and the space contained within is a marvel of ergonomic excellence – with one minor admonition.

It you like the provided phone holder that inserts into a slot in the center console – and there’s a fair chance you will appreciate it – it puts the buttons that control the heated front seats out of sight. Of course, that’s no concern this time of year and not a problem once the controls are located.

The phone holder props a smartphone at an angle tilted back slightly for easy reference at roadside or when stopped in traffic, and is perfectly placed to maintain a Bluetooth connection seamlessly. The clever holder swivels so a passenger can monitor it as well. For those not so concerned with a phone the device can be removed and placed in any of the convenient storage compartments.

Adjusting the well-bolstered sport seats, hands take the perforated leather wrapped wheel as the feet find the aluminum sport pedals below. Reaching right, the shift knob is also wrapped in perforated leather, easily grasped with a forearm on the padded armrest. To its left is the Lexus display screen control that functions like a mouse, but it seems a little finicky until one gets used to it.

The display screen is hidden in the dash until deployed and is only about seven inches but that seem to fit the size of the car. Electroluminescent Optitron Gauges are easily legible and the articulation of the steering wheel controls most features of the vehicle’s audio, climate and information settings.

The moonroof opens about a foot, an appropriate degree for the urban environment where the 2013 Lexus CT 200h F-Sport will spend most of its time.

The driver's seat is 10-way adjustable with power lumbar bracing. The incoming air filter removes dust and pollen and even has a deodorizing effect.

The rear seats are not too roomy with a tall driver in the car, though there is 32.8 inches of legroom there, according to company specs. We did fit three adults into the little hatchback for a short cross town errand and that went well, with no complaint from the rear seat.

There’s a fair chance many would simply leave the rear seats folded flat to maximize cargo space, accessible through the liftgate or rear doors.

Safety and Technology
Occupant safety in the 2013 Lexus 200h starts with the high-tensile strength steel and aluminum components surrounding the interior and the addition of side door beams that soften cross impacts.

Soft impact-dissipating interior trim in the upper part of the CT combines with 12 state-of-the-art airbags in case of collision. The front impact cushions use a dual-stage, twin chamber system coupled to impact sensors and seat position to determine the degree of deployment. The bags will not deploy if a passenger weighs less than 68.3 pounds or if a child carrier is in place.

Official Ratings
The EPA has measured the emissions of the definitive hybrid to be among the best of cars not completely electric, scoring the maximum of 10 on CO2 and 7 for particulates. It has a projected annual fuel cost of $1,300 based on 15,000 miles.

The EPA rates the 2013 Lexus CT 200h F-Sport at 42-mpg for combined city and highway driving. We got about 36-mpg across about 300 miles of mostly city driving, but should note we had the vehicle in sport mode more than half the time.

The 2013 Lexus CT 200h is a Top Safety Pick of the Insurance Institute for Highway Safety, though no small overlap test has been completed as yet. It scores Good in all other tests, however.

Driving Dynamics
The 2013 Lexus CT 200h in intended to be an efficient car that’s fun to drive. The F-Sport package makes it a very fun to drive vehicle that’s still fairly efficient.

The product information states the hybrid will go from zero to 60 in 10.1 seconds – the F-Sport will probably cut 2 or 3 seconds off that time, but we did not specifically test that presumption, but we did take it on the highway and it definitely seemed a bit faster than that.

When driving through a residential neighborhood, a fellow out walking his dogs, flagged us down to inquire about the car. He said he had an interest in the model, but all the reviews he'd read had torpedoed the vehicle as underpowered.

I replied that this was a F-Sport version of the CT 200h and it did not strike me that way – I’ve driven PT Cruisers and know a gutless wonder when I’m in one.

It was also pointed out that some auto writers are only impressed with acceleration and horsepower, lacking any true appreciation of efficiency. This comment is not leveled at any of my colleagues at Torque News – they are all smarter than that.

Most of us spend a great portion of our lives driving back and forth to whatever pays the bills – not on the open road or racetrack, where hundreds of horses can be given the reins.

So I told the gentleman he should look into the car further and maybe drive one himself – make up his own mind. Though he looked old enough to claim an AARP card, the cookpot should never call the kettle black.

The 2013 Lexus CT 200h may be aimed at a young driver, but there are doubtless many Boomers out there, unencumbered with spouses or children, who would be happy with the definitive hybrid for a good while - count me among them.

The Bottom Line
The base price for the 2013 Lexus CT 200h is $31,750 to which the Premium trim level and F-Sport packages add greatly, bringing the total price with destination charges of the model driven to $39,940.

However at the recent press preview for the 2014 IS 250 and IS 350 models, the brand introduced a new pricing approach for various couplings of high tech, like blind spot alerts, rear cross traffic monitoring, navigation, parking assistance and so on.

So by the time the new models arrive later this year, an equivalently equipped model might have a slightly lower price. Correspondingly, as the new model release nears, deals may be forthcoming for vehicles just like this one.