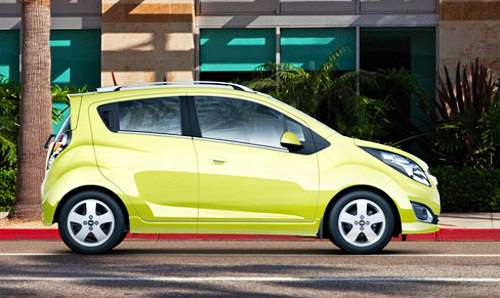 The 2013 Chevy Spark and Sonic, in a marketing decision aimed specifically at Millennials, will come with an enhanced version of MyLink that takes advantage of the movement of cloud-based smartphone apps to put less in the car while maximizing the capabilities of the owner’s phone.
Advertisement

Essentially, new compacts and subcompacts (not to mention luxury vehicles) as time goes by, will increasingly require that the buyers phone is smarter than the car.

Whereas a hard drive or DVD based navigation system may cost up to $2,000, the phone based navigation apps on the 2012 Chevy Spark and Sonic may be as little as $100 for the telephone application that enables the car to guide you.

To keep the price of small cars like the Sonic and Spark low, it makes sense to remove some of the hardware traditional to cars, like CD players and DVD navigation. Many people, both young and old, now have their music on their phone and Bluetooth capabilities that make synchronization both easy and commonplace.

It is likely many Millennials have never owned a CD or any form of recorded music other than digital downloads on iPods, iPhones, iPads, Androids, netbooks or other electronic personal devices.

Though still around in fringe degrees, LPs, 8-tracks, cassettes and CDs are the modern equivalent of the steam engine – seriously out of date. So the newer, wiser GM is clearly making better decisions, having learned from recent successes.
Sales of the Chevy Cruze were a major contributor to GM’s return to global prominence last year and the 2013 Spark and Sonic intend to expand upon that success.

In these cars, Bluetooth, along with auxiliary and USB jacks, make connectivity a breeze. Like the luxury brand Lexus’ Enform, the system works to provide apps stored on the phone such as Pandora and Stitcher radio, all controlled through MyLink.

The new owners just download an app called GoGoLink, so the phone can put navigation data on the touchscreen. Essentially the cars video display just becomes a larger information provider than the screen on the phone.

iPhones all come with Google Maps, which can be used to provide guidance whether walking, driving or taking public transit, so why not in the car as well. GogoLink stores routes and maps on the user’s phone and can be used from on GM vehicle to another – a sweet aspect of this approach.

iPhone users can plug in via USB allowing the phone to charge while it allows apps (including iTunes) to function in the car. Android users have to rely on Bluetooth connectivity.

Motor Trend’s Donny Nordlicht quoted Chevy’s Sara Leblanc as stating, “Think of it as smart phone, dumb radio,” he enthusiastically said. “We’re trying to keep our customers simple, safe, and connected, yet give them all of the features they’re looking for.”

According to a related story on Digitaltrends.com by Stephen Edelstein, Chevy expects the app to cost less than $50.

Motor Trend says the initial vehicles with this MyLink system will be 2013 Spark, slated for summer availability, followed by standardization on 1LT, 2LT, and LTZ models. Pursuant to the Autumnal Equinox, the 2013 Sonic LTZ and RS will be released with the new software standard.

Reportedly the GoGoLink app will be made available via the Apple App Store and Android Market as well by year’s end.

As the lives of American are increasing center around the features of their phone, GM is riding the crest of the wave in social trends. Chances are this will help keep their sales data at the top of the heap during 2012.