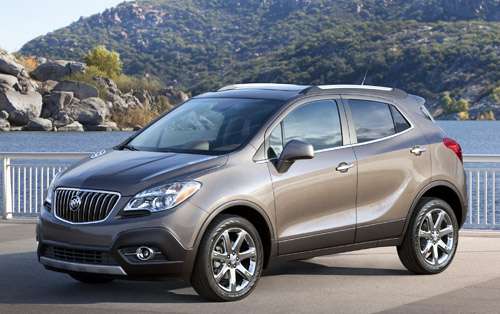 The 2013 Buick Encore sets the benchmark for small SUVs

The 2013 Buick Encore debuted just this January at NAIAS, and this week visitors to the Denver Auto Show got their first look at the new small SUV the brand hopes will add to the meteoric success of the LaCrosse, Enclave and Regal.
Advertisement

Buick was a considerable part of GM’s return to the global top spot during 2011, with year-to-year increases roughly doubling for some models. Hoping to outperform the sales of both the BMW X1 (when it finally gets here) and the Audi Q5, the brand is setting their gun sights high.

“Buick models continue to gain in popularity, with two consecutive years of higher retail sales,” said Tony DiSalle, U.S. vice president of Buick Marketing in a release at the models launch in January. “The Encore joins Verano – Buick’s third all-new sedan in three years – to round out the brand’s lineup and continues the momentum established by the Enclave crossover almost five years ago.”

Based on sheer styling in a segment where it’s hard to distinguish a make visually, the 2013 Buick Encore is more striking in its appearance than either of its competitors. If looks were everything, it would be a hands-down shutout.

Still you can tell the manufacturer is in it to win it by decisions like limiting all models to a single wheel size of 18-inches, allowing the suspension to be fine-tuned to this one configuration.

This is further demonstrated by the initial use of active noise cancelation technology in a Buick model. Microphones within the passenger cabin detect noise triggering a sonic response in a wavelength that erases the sound. If you remember wave motion demonstrations from 9th grade physics, the technology uses what’s called destructive interference to cancel out the sound wave.

“Of course, all Buicks have wrapped A-pillars that help to lessen wind noise,” said Lloyd Bierman, Marketing Manager for the Buick Crossovers, addressing the assembled media at the Denver Auto Show.

Other significant features include a segment-leading amount of cargo space exceeding that of the stated competition. The 2013 Buick Encore has 18.8 cubic feet of cargo area with the rear seats up and 48.4 cubic feet with back seats laid flat. A surprising and versatile aspect is created by the fact the front passenger seat also folds flat allowing the transport of unusually long gear or purchases.

“That’s room enough for two coolers and a tackle box,” exclaimed one unnamed member of the assembly.

A wheelbase of 100.6 inches within a length of 168.5 inches creates remarkably high ratio between the two and coupled with a track width of 60.6 inches establishes a platform that should deliver the smooth, yet capable ride Buick demands from their vehicles.

The 2013 Buick Encore is powered by a fuel-stingy 1.4-liter, turbocharged 4-cylinder Ecotec engine mated to a six-speed automatic transmission. The power plant produces about 140 horsepower and 148 lb.-ft. of torque between 1,850 rpm and 4,900 rpm.

Advanced aspects such as a high-efficiency alternator, electronically controlled no-return fuel system and a deceleration fuel cut-off system help to keep the crossover on a supermodel’s diet with fuel efficiency expected to be somewhere in the mid-30s.

Though pricing is yet to be announced, the 2013 Buick Encore stands poised to set the benchmark in the small premium SUV market.

Adaval wrote on March 24, 2012 - 10:06am Permalink
I have been following the Buick Encore since it's inception. The ups and down, Buick was going to manufacture this vehicle, then it wasn't, back and forth for months and months. I have always been a Buick lover, because of the comfortable ride, and quietness on the road. I am very excited to own the Buick Encore if the price is not out of sight. . I am a little disappointed of the width of the Encore, a couple more inches would have been nice so you don't feel you are sitting shoulder to shoulder with your passenger. I loved the Buick Rhondevue (sp) the size was perfect, shorter but had the width. I leased 2 of these vehicles and would have leased again but you stopped production of this SUV. I am now in a Chev Equinox which I have enjoyed very much, but it is not a Buick. I miss the comfortable and quiet ride of a Buick. I also don't understand why the lumbar seat is only on the drivers side. The Rhondevue had the lumbar on both the drivers side and passenger side. It was a great SUV as I said before. I know you are trying to bring the young people to the Buick world, but there are many of us older generation that prefer to sit up when we drive, to slide into the vehicle is so much easier for us as we age, than having to fall in and climb out of a car. Not an easy task as our knees give out, have back problems etc. I big hope now is you don't price it out of sight for many of us who are on a fixed income as we age but would still like to be able to afford the Buick Encore SUV. Maybe a senior citizen discount! ! ! My lease is up in 2014 and the Encore is coming out in 2013 so I am looking forward to at least test driving the Encore, and go from there. I hope this gives you some insight on how Buick lovers feel. . . .