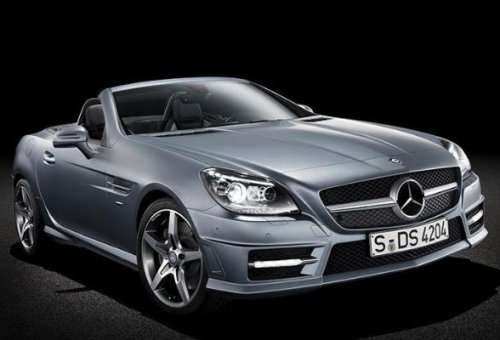 Few things are as pleasurable as an open air drive on a warm summer evening, with the lights of the city spreading across the valley like the stars in the heavens above. Few vehicles deliver that feeling like the Mercedes-Benz SLK roadster. The 2012 model, the third generation of the car that launched the move to automatic hardtops, in now arriving at dealerships in the U.S.
Advertisement

The new SLK presents a slyly intimidating visage with its horizontally elongated grille, slanted headlamps and the shark-like grin of the lower fascia. The new model features relatively wide doors and a shortened rear deck. The SLK convertible will be available in U.S. showrooms this month at a base price of $54,800, minus delivery and destination charges

The convertible roof is now made of polycarbonate and an optional panoramic roof provides a see-through panel. Another option is what Mercedes-Benz calls a Magic Sky Control roof, which allows the occupants to vary the opacity of the panel. A chemical film known as a matrix polymer is positioned between two layers of glass. It contains oblong nano particles that line up when an electric current is applied, allowing light to pass through. When the electrical current is off the nano particles disperse randomly, reducing light and tinting the roof panel.

Another new feature is new 3.5-liter V6 engine with direct injection and multi-spark ignition. Boasting more power and better fuel economy than the power-plant of its predecessor, the new SLK engine generates 302 horsepower and 273 lb.-ft. of torque. Next year the SLK250, a new turbocharged 1.8-liter direct injection four-cylinder engine will join the line-up producing 201 hp and 229 lb.-ft. of torque.

The SLK comes with the "Attention Assist" system standard, that adds a sensor to intelligent software that identifies erratic steering corrections drivers make as they get sleepy. When the system senses drowsiness, an alert appears in the instrument cluster and a display states, "Time for a rest!" The system is sophisticated enough to differentiate sporty driving and functions between 50 and 100 mph.

A trendsetter still changing the auto industry, the latest SLK is best loved for its distinctive retractable hardtop. With the top up, it's a quiet, weather-tight coupe - push a button and in 20 seconds later, the car is topless. Unlike many retractable tops this one doesn’t hog too much of the trunk space. In the same fashion as the larger SL model, the rear window of the SLK fits into the curvature of the top as it's being lowered.

An optional AirScarf system extends the open-air driving season into the cooler months by blowing warm air from the driver and passenger’s head restraints, allowing occupants to cruise comfortably with the top open in cooler weather. The system even compensates for changes in vehicle speed.

In some parts of the country you can keep a convertible top down 300 days a year or more. Seeing people driving convertibles on lovely days with the top up, you can only wonder they’re hiding from the sky.

Anonymous wrote on September 3, 2011 - 12:30am Permalink
That's good news. I can see the great improvement of <a href="http://www.car-stuff.com/mercedesparts.htm">benz parts</a> in this one.The convertible roof is something new for a benz model. It's also nice to see the changes in the engine for fuel efficiency.