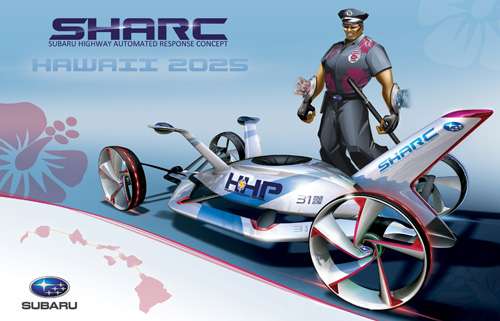 The 2012 Los Angeles Auto Show Design Challenge has prompted participating auto manufacturers to envision the Highway Patrol vehicles used to interdict offenders in the near future, when cars may be autonomous and many alternative fuels may be in use.
Advertisement

Attempting to predict how the ever more rapidly changing technology in our lives will affect police pursuits and human behavior in as little as 12 short years is indeed a challenging undertaking.

In this Ninth such competition inspired by the LAAS, a highly competitive group of automotive design studios have imagined the law enforcement patrol vehicles the world of 2025 might demand. Some predict drones used to observe, pursue and engage from both the land and air while others conceive alternatively fueled vehicles carrying advanced topographical scanners.

All the entries are proposed to counteract an entirely new set of priorities and considerations to enforce the law in a radically different urban environment. Will it see budgeted law enforcement as portrayed in THX1138 or will law enforcement have to deal with addictive new technologies like those suggested in Strange Days?

Will autonomous cars make it common to be intoxicated in cars or make such behavior even less socially acceptable?

Will the criminals of the future be mobile hackers who use their skill to override urban traffic systems on the fly and block anyone attempting to follow?

Such are the questions designers from BMW, GM, Honda, Mercedes-Benz and Subaru considered in conceiving their entries in the design competition.

The criteria entries will be judged upon includes the future needs of advanced technology; speed and agility in coming traffic realities; overall creativity; complying with emission standards; and finally environmental sustainability, covering fueling, maintenance and recyclability.

The single entry deemed most viable and visionary will be announced Nov. 29 during a special event during the LA Auto Show’s Press Days from the following entrants:

BMW Group DesignworksUSA
Working around the populous Los Angeles area, BMW created a 2025 scenario requiring an E-Patrol Human-Drone Pursuit Vehicle. It is based on projections indicating Los Angeles will have more and faster traffic, plus numerous alternative fuel sources.

Their concept uses a modular structure and drone technology to enhanced both teamwork and accessibility. The main two-passenger vehicle can launch three drones, one hovering and two ground based. In a pursuit situation during heavy traffic periods, the drones chase the suspect, reporting data back to the patrol vehicle, as officers track the offenders from a distance at safe speeds, thereby protecting law-abiding motorists while remotely pursuing nearby suspects.

General Motors Advanced Design California
GM, foreseeing the dominance of electric vehicles, has envisioned the Volt Squad, to bring law and order to a highway system brimming with cutting edge technologies. The Volt Squad is comprised of a three-vehicle enforcement group, embodying the mission to observe, pursue and engage. Each of the three vehicles has its own clearly defined role to provide superior flexibility, enhanced capabilities and a larger presence to the California Highway Patrol (CHP). Naturally, the core of the vehicle architecture is the Volt’s electronic propulsion system.

Honda R&D Americas, Inc, Advanced Design Studio, California
Honda Advanced Design group has created a Drone Squad for the CHP. This system is created for efficiency in the presumed harsh environment of California highways of 2025 but requiring no new infrastructure. The Drone Squad uses a two-vehicle system. Including a command Auto-Drone that can function manned or un-manned to deploy Moto-Drones even on the move. Moto-Drones are un-manned motorcycles similar to the concept portrayed in Terminator Salvation that can be rigged for a variety of response or rescue missions.

Honda R&D Company, Ltd., Advanced Design Studio, Tokyo
Honda R&D Japan's CHiPs 2025 Traffic Crawler offers what they believe will be necessary to the CHP as the traffic environment of 2025 changes. They foresee not only bigger traffic problems, but also bigger vehicles as they are freed from environmental constraints by new technologies. They highlight a confusing and challenging transition period to safe autonomous cars, as California returns to a flourishing car culture. Honda designed a new patrol vehicle to offer performance and mobility with the durability required by severe traffic situations.

Mercedes-Benz Research & Development North America, Inc.
The M-B Advanced Design Center in California expects law enforcement will adapt to crowded roads with electronically monitored and controlled traffic, to accommodate a much larger population, with corresponding changes in human behavior by 2025. They present the Mercedes-Benz Ener-G-Force purported to be the most environmentally friendly SUV anywhere to help police worldwide. Based on the G-Class, an offroad icon in production since the 1970s, which supposedly continues to shape the future as a structurally and technologically advanced SUV.

So in Hawaii, the Highway Patrol will sit in the office playing video games that control robots in the real world, that do all the heavy lifting.

What remains to be seen is if global politics, economics and weather will combine to usher in the worlds of Soylent Green, Blade Runner, The Fifth Element or Hunger Games.

When it comes to the designs above, we think the concepts from BMW and Subaru are the most visionary and likely to come about. However, the police operating the SHARCs remotely in Hawaii are more likely to look like nerds than native gods, such as the policeman pictured in the photo above.