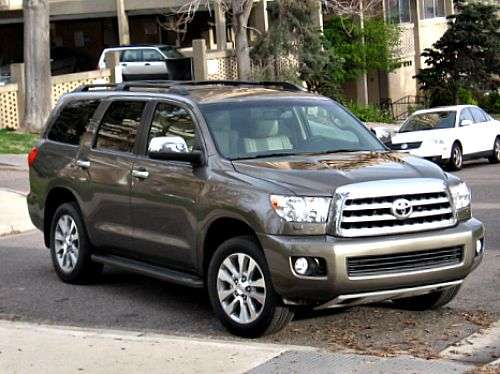 The 2011 Toyota Sequoia combines the capacities and capabilities of a full size SUV with flex fuel versatility and the surprising handling of a somewhat smaller vehicle.
Advertisement

When one changes vehicles as frequently as an auto writer sometimes does, one can experience a sort of mental “jet lag,” momentarily forgetting what you are driving this week, as they all kind of blend together on bleary mornings. When you tend to drive everything like a sports sedan until reality points out this is not the best of plans, changing from something like an Audi A4 to a Toyota Sequoia can have its moments.

That was what we found truly startling about the 2011 Toyota Sequoia – you can drive it much more like a sports sedan than you would ever imagine you could in a vehicle this size.

Driving through the Colorado mountains the 2011 Toyota Sequoia climbed and cornered like the pirouettes performed by one of the tutu-clad hippopotami in Disney’s Fantasia – a ballet so nimble it defies the size and weight of the performer.

This is likely the result of its coil-spring independent double wishbone suspension front and rear coupled to the vehicles stability control system enhanced with TRAC, Toyota’s traction control system.

Powered by the iForce 5.7-liter, 32-valve V8 engine, the 2011 Toyota Sequoia has power to spare for climbing, passing and no doubt a fair degree of off-roading. The power plant produces 381 horsepower and 401 lb.-ft. of torque.

An engine that size naturally is not a fuel-efficiency star, getting only 13-mpg in town and 18 on the road. However, if you need this type of cargo capacity, towing capability and power, the flex fuel option can save you a lot when the price of regular gas goes up. Right now E-85 is only about 20¢ less than regular unleaded, but just a few months ago the difference was more like 80¢ a gallon – that’s enough to add up quickly with no change in the way the SUV performs.

In the safety department, beside the electronic braking systems, the Toyota Sequoia features an advanced airbag system with seat mounted side emergency cushioning, all-row side curtain airbags with roll sensing and cut-off, plus front seat knee airbags on both sides.Other safety and functionality assets include heated side mirrors, de-icing windshield wipers, and multi-reflector Halogen headlamps with auto-dimming and fog lamps.

The sound and telematic systems on the 2011 Toyota Sequoia are top shelf with upgrades and navigation coming as a $1,460 option. The essentially necessary rearview camera comes with this option, though front and rear sonar parking assistance comes standard. In a vehicle this size, a backup camera system is highly advisable.

Some SUVs are not easy to drive but that in no way describes the 2011 Toyota Sequoia – the only problem here is you may forget how big it really is, clipping a curb here and there until used to it.

Still at a delivered price of $55,255 it is a powerful, yet comfortable, on and off-road warrior. Whether the battles you’re fighting are against the economy or nature herself, the 2011 Toyota Sequoia is a good asset to have on your team.

Anonymous wrote on September 12, 2011 - 1:16pm Permalink
Is this E85 compatible car also M85 (Methanol 85%) compatible? In the long run M85 will be the cheapest fuel to drive with. See http://www.nationalreview.com/articles/272685/tripling-america-s-fuel-production-robert-zubrin#comment-290103