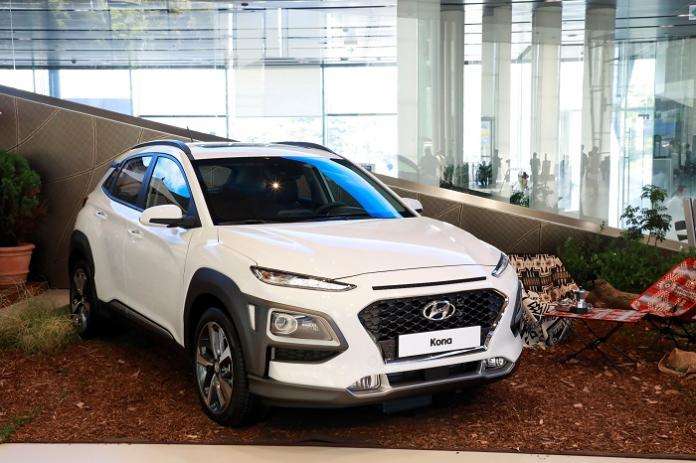 A Hyundai designer sat down with attending media before the company’s launch of the Kona subcompact crossover SUV in Korea to talk design, globalization and the future.
Advertisement

Perhaps the biggest news nugget: Hyundai will differentiate designs more throughout the lineup. That’s likely a bid to stand out more in an attempt to increase sales.

“Generally, across the whole model lineup, each car will have its own character, its own personality,” Luc Donckerwalke, Hyundai’s senior vice president of design and head of the Hyundai Design Center, said. “There will be a Hyundai DNA, but there won’t be any clones. You will not see the same design elements applied systematically to all models.”

This makes sense, and the Kona itself provides a blueprint – it looks quite different from the other crossovers in the Hyundai line, while still retaining features that mark it as a Hyundai.

Features such as the brand’s new cascading grille. The grille will be used across the lineup, starting with the Kona and the refreshed Sonata mid-size sedan, but it will vary in appearance from model to model.

“The grille is … never to be the same. Otherwise you’ll just end up scaling something. Proportion will change,” he told WardsAuto. “I still have some years to create, and I don’t want to get bored.”

He said Hyundai’s lineup has too many models to have lookalikes.

“We have such a huge palette of cars, we have to assure each model has its own specific character and doesn’t cannibalize another one, so we do that via design, basically,” he said.

Example of cars that look similar now but will less so in the future include the Sonata and Elantra.

Donckerwalke said that working for a mass-market brand gives him a freedom that he wouldn’t have when he worked at places like Audi, Bentley, and Lamborghini. That may sound counter-intuitive – after all, a volume brand has a larger bureaucratic structure in place, with all the restrictions that usually entails – but working at a place with a storied history means designers need to abide by said history – which means including certain design elements.

“When you’re a designer for a premium or luxury brand, it is a bit annoying, because you have to create a new model but you have to take all the [existing design cues]. You cannot evolve that much. When you’re designing a car for a volume brand that definitely wants to innovate, you can start with a white sheet of paper,” he said. “Obviously you have to define the DNA of the brand,” he continues. “But you’re not starting with 70% of the design done and then you [are trying to] differentiate with the 30 percent left. It is always a frustrating exercise. And we’re not even taking this approach with [Hyundai’s premium] Genesis [brand].”

It’s interesting, though not all that unusual, to hear a designer speak so frankly about the brand he or she works for, and its strengths and weaknesses. What we’ve learned here is that Hyundai is battling slumping sales, along with everyone else in the industry, and this one way to perhaps give a brand a boost.

It’s a fine line – Hyundai will still want its cars to be recognizable as such, but with more differentiation, there might be more buyer excitement – and that can only help.

Ed B wrote on December 14, 2018 - 12:46am Permalink
I'm looking forward to the new Palisade. The design language is interesting, but I have to get used to the head lights being at bumper level. My concern is durability and crash results/safety. Having the headlamps that low will make them more susceptible to damage from rocks, road debris, etc. How does Hyundai respond to that? Are the headlight casings provided with stronger glass and or plastic housing? Will this impact crash results with headlights that basically make up the bumper sections - especially with the IIHS offset crash testing.