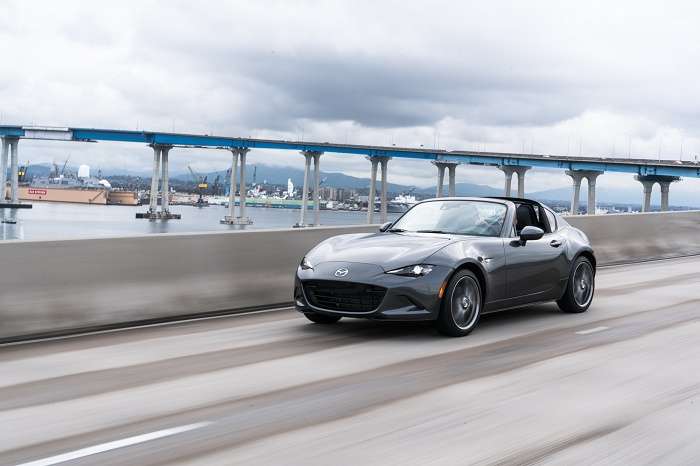 New-car sales have been on a losing streak in recent months, and some analysts and market observers are worried (I am not, I think it’s a natural plateauing after two or three years of record sales), but notably, sports cars are bucking the trend. That includes Mazda Miata sales.
Advertisement

Sports car sales are up 3.4 percent despite an overall market slide of 12 percent. The Mazda MX-5 Miata, has shown strong numbers, despite a slight dip in March.

I think I know why the Miata, which is far from a practical vehicle, is doing well in a time in which it seems like niche sports cars might struggle. After all, wouldn’t it be logical to think that impractical sports cars, which are often second or third cars for people, would sell in smaller numbers and see greater declines when the market slides?

For one, this recent sales slide doesn’t appear to be tied to the greater economy. Sure, during the Great Recession, it might make sense that sports cars might suffer as buyers shifted their limited resources to target more-practical rides. But, again, this sales slump appears to simply be a correction back to reality after several years of sales levels that were unsustainable.

Then there’s the appeal of the Miata itself. It’s relatively new, having undergone a major redesign for the 2016 model year. A retractable rooftop version has been recently added, making the car easier to use in inclement weather. It’s still relatively affordable and still beloved by enthusiasts – and it’s still a pretty good daily driver, despite the fact it only seats two.

Warm Weather is On the Way

Plus, spring is here. With warmer weather on the way, those who might be in position to buy a convertible as either a weekend “toy” or even a daily driver might be doing so now, in order to get maximum fun in the sun. The fact that this past winter was relatively mild in many places likely didn’t hurt, either, as people got a head start on summer driving season.

It’s a fun little story, from an enthusiast’s perspective, to see that sports-car sales were a bright spot in an otherwise bleak sales report. It’s also not entirely accurate, as mid-size sports cars like the Ford Mustang and larger sports cars like the Chevrolet Corvette, suffered. And the mainstream market has a bright spot of its own – trucks and SUVs, including crossovers, have seen increased sales. In fact, the rise in truck sales may work hand in hand with the overall cooling of the market to explain why mainstream car sales are down.

So bully for Mazda, but keep in mind that the overall market has hit a plateau, and the Miata is bucking the trend because it’s as popular as it ever was – all because Mazda found a good formula and stuck with it.