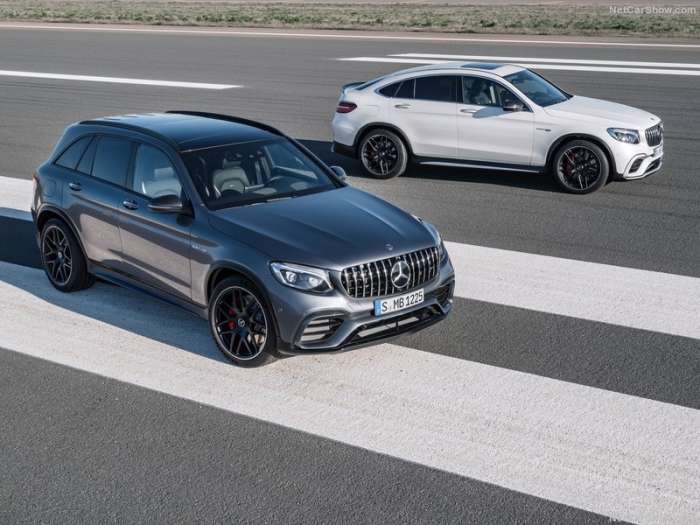 The Mercedes-AMG GLC63 and GLC63 Coupe Were Inevitable, but They're Still Great

There aren't many surprises here when it comes to Mercedes-AMG GLC63 and GLC63 Coupe, but if the formula works, why change it?
Advertisement

Not long ago, Mercedes decided that instead of having AMG perform its magic on select cars here and there, it would instead offer an AMG version of pretty much every vehicle it sells. To some, it was a move that diluted the AMG brand. But at the same time, if customers were clamoring for more high-performance choices from Mercedes, why shouldn’t they be available?

The expansion of the AMG brand, of course, included SUVs. So it was only a matter of time before the GLC (formerly the GLK) got the full AMG treatment. And since Mercedes also builds a four-door coupe version of the GLC, we had to assume there would eventually be an AMG version of the GLC Coupe, as well.

What we didn’t know was how long it would take for Mercedes to show off the GLC63 and GLC63 Coupe. But this week, ahead of the 2017 New York International Auto Show, the two finally made their debut. The results are, well, pretty much what we all expected.

If you opt for the regular GLC63 (or GLC63 Coupe), it comes with a 4.0-liter twin-turbo V8 that makes 469 horsepower and 479 lb.-ft. of torque. Alternatively, you can spring for the S version that makes 503 horsepower and 516 lb.-ft. of torque. Despite being relatively heavy luxury SUVs, that’s still enough power to make both versions seriously quick. Mercedes claims the S can hit 60 mph in 3.7 seconds, while the non-S does it in 3.9.

Those numbers are actually quicker than the C63 sedan is capable of hitting, presumably thanks to the GLC’s all-wheel-drive system. It can still send all of its power to the rear wheels, but under hard acceleration, owners will probably appreciate the added grip.

Design-wise, there aren’t really any unexpected changes, either. If you have a good idea of what AMG does to other cars, the GLC63 twins’ appearance won’t be much of a surprise. Both SUVs look like they did before, only a little more aggressive. Inside, it’s the same story, only with some extra aluminum trim.

Personally, I’m not a fan of the GLC Coupe’s design (or the existence of four-door coupe SUVs in general). But if anything could convince me it’s not that bad, it would be shoving a 500-horsepower V8 under the hood. They might not be naturally aspirated anymore, but the 63-series engines still sound incredible and have some serious power.

Despite the GLC63 Coupe supposedly being the more trendy or stylish choice, I actually think the normal GLC63 is better looking. Then again, I’m also a terribly cliche wagon and hatchback fan, so the fact that it looks like a wagon with a bit of a lift is appealing to me.

AMG purists might think it’s heresy, but considering the U.S. doesn’t get the C63 wagon, I have to say I like the idea of the GLC63. Rear-wheel drive is more fun in dry conditions, but anyone who’s ever driven a C63 through a rainstorm can tell you that all that power can almost be too much. Even for the electronic nannies.

The all-wheel-drive GLC63 solves that problem and offers more practicality to boot. What’s not to like?